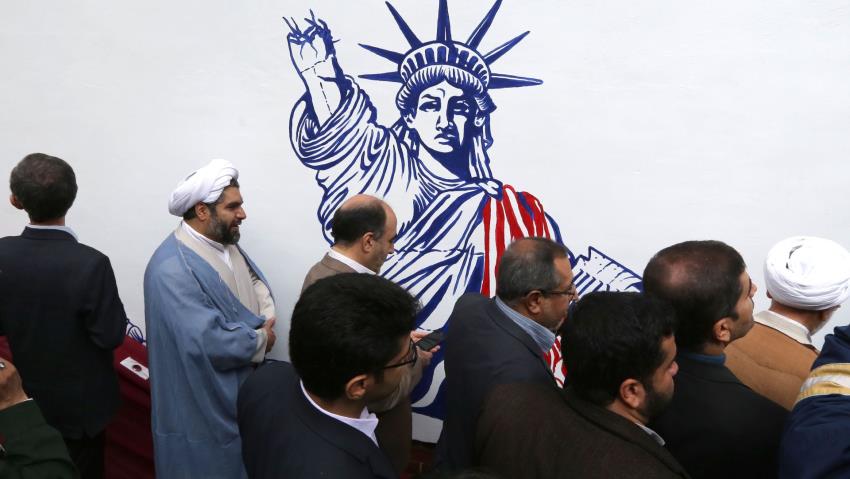 What will happen to US ‘maximum pressure’ on Iran after the election?

Since the Trump administration’s withdrawal from the nuclear deal in 2018 and the “maximum pressure” strategy of reimposing crippling sanctions, Iran has abandoned its key commitments, including the resumption of uranium enrichment.
These moves have been accompanied by increasing ballistic missile tests, mysterious attacks on oil tankers in the Persian Gulf, increased meddling in conflicts across the Middle East and unrest on Iranian streets.

Given these consequences, how would Trump envision pursuing this tactic even further? And how would Joe Biden seek to salvage the Joint Comprehensive Plan of Action (JCPOA) he helped create, and rectify Washington’s relationship with Tehran?

Democratic nominee and former US Vice President Joe Biden, who was himself part of the deal’s brokering team five years ago, criticised his rival’s decision to pull out of the agreement in the first televised presidential debate, pointing out that Tehran is now closer to being able to build an atomic bomb than it was two years ago.

Biden and the Democratic party have previously stated their intent to return the US to a strengthened JCPOA and address international concerns about Iran’s missile programme, if he wins Tuesday’s election.

In an op-ed published by CNN, the presidential challenger vowed if he was elected to hold the Iranian government accountable for human rights abuses, including the execution of Navid Afkari and the imprisonment of political prisoners, such as Nasrin Sotoudeh.

“When Donald Trump ran for President, he promised a ‘better deal’ to constrain Iran’s nuclear program and pledged to pressure Tehran into curbing its aggressive behavior across the Middle East. Like so many of President Trump’s promises, these proved to be just empty words,” Biden wrote.

He also stressed that if Iran resumes full implementation of the nuclear deal, under his presidency the US would restore its support for the UN Security Council, referring to the Trump administration’s break with the council in its bid to reimpose UN sanctions in Iran that were lifted with the JCPOA deal in 2015.

The US’ break with the council has only served to increase the nuclear threat from Iran, Biden claims.

Trump’s resounding defeat at the council in September – where Washington’s counterparts rejected reimposing the arms embargo on Iran – has left the US isolated and by many accounts, humiliated.

Despite four years of Iran rejecting any renegotiation of the deal with the US without certain conditions, Trump claims that if he wins re-election he can reach a new agreement with Tehran in just four weeks.

Iran’s conditions for a new deal

Some experts believe that regardless of whether Biden or Trump wins, the only solution available for the US to reduce the dangerous level of tension with Iran is to re-enter negotiations, return to the UN Security Council, end sanctions, and pay Iran the damages it demands within three years.

In an interview with the BBC World Service, Majid Takht Ravanchi, Iran’s ambassador to the UN, said even if Biden wins Tehran would still have conditions for staying in the JCPOA.

The first condition would be that a new US administration must pledge not to repeat a breach of the nuclear deal. The second condition is to compensate for the financial and human suffering that Iran has suffered due to the sanctions.

Iranian President Hassan Rouhani has been clear in his belief that the US maximum pressure strategy has failed, although he has admitted that his government and Iranians alike face serious problems.

Iranian leaders have emphasised “resistance” as their policy to US maximum pressure.

“The economy is a key determinant,” Iran’s Supreme Leader Ayatollah Ali Khamenei said earlier this year. “A strong economy is an important factor in the country’s invincibility and impenetrability, and a weak economy provides grounds for the influence and domination of enemies.”

The future of Iran’s oil exports: Trump vs Biden

As with Hillary Clinton four years ago, there is a sense of certainty in Iran that Biden will clinch this year’s election.

But Iranian leaders must not repeat their mistake of 2020, while also keeping in mind that a Democratic administration would not necessarily mean a straight-forward de-escalation of tensions. As neither Biden nor Trump can continue the policy of maximum pressure, US policy towards Iran should be changed as a rule.

Although at the time many believed that the Obama administration’s motivation behind the JCPOA was to integrate Iran into the international system, his former vice president’s intentions could be quite different.

It seems likely that this time around, Biden will set conditions for Tehran to return to the JCPOA in a way that builds US-EU unity in order to manoeuvre against Iran, as a Democratic president is likely to be an attractive coalition partner to European powers.

Trump’s re-election on the other hand would mean the US continues on its path of aggressive destabilising of the global political and economic spheres. In the case of Iran, too, Trump’s policy for his next term is expected to be a continuation of the past four years.

In fact, those who been part of creating Trump’s policy towards Iran over the past four years wish for it to prevail. For all the same reasons that negotiations with Tehran did not take place in Trump’s first term, we can expect there to be equally insurmountable challenges to any such diplomacy in a second term.

With chaos in the oil markets due to the Covid-19 pandemic and declining demand, the OPEC plus agreement, while entailing heavy production cuts, has helped bring the oil price back to $40 dollars a barrel. However, Russia has said even more cuts are necessary, likely in the range of a further 5 to 10 million barrels per day, in order to salvage the market and bring prices back up to $50-55 per barrel.

Therefore, Iran’s re-emergence into the global market with an estimated export rate of about 2 to 2.5 million barrels per day would give the market another price shock.

Contrary to the view that Democrats are proponents of both renewable energy and high oil prices in order to fund this shift, they may actually welcome low prices, which could accelerate the decline of the oil industry and put financial pressure on US oil lobbies close to the Republican Party.

Due to low prices, allowing Iranian oil exports is not going to increase the Islamic republic’s foreign exchange earnings significantly. But in any case, it would be a lifeline in comparison to maximum pressure.

Many analysts now agree that maximum pressure had no effect in curtailing Iran’s aggressive foreign policy in the Middle East, nor has it brought down the regime. In fact, maximum pressure might now be working directly against US interests because Iran seems to be turning to China to save its economy, allowing Beijing to gain significant influence in the region.

A document leaked in August suggested Rouhani reached a wide-ranging deal with Beijing encompassing cooperation across trade, politics, culture, and security and including billions of dollars of worth of investment in Iran’s economy. Meanwhile, China enjoys plentiful and cheap imports of Iranian oil. Security cooperation also entails joint military exercises, weapons and intelligence.

On the other hand, if Biden is elected, the likelihood of a new deal between Iran and the United States will increase. However, to maximise the chances of success, the deal should not address the internal or external issues facing the Iranian economy, nor should it demand transparency in it.

The policy of maximum pressure meant it was selling oil on the grey market in order to retain its market share, but it is not clear at what price it sold oil and whether it was able to actually access the proceeds.

Iran’s foreign policy however needs to be addressed. If Iran does not comply with Biden’s demands, and continues to conduct missile tests or the advancement of its nuclear programme, it is likely any deal would collapse.