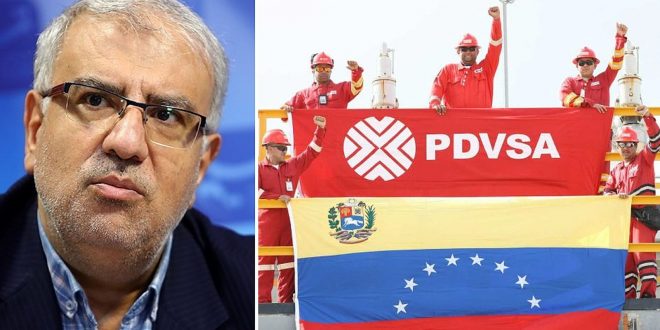 Political and economic relations between Iran and Venezuela have grown over the past two decades. The South American country has the largest known oil reserves in the world but, despite being recognised as a leading economy on the continent for many years, Venezuela is a prime example of the “economic downturn“.

Many analyses can be made about the relevance of the rich energy resources of both countries given the US sanctions on them. Much can also be said about the relationship between the ideological identities of both countries in the face of sanctions, and the solidarity that they have developed. We can also comment on the legality of US sanctions and those of Washington’s allies against Iran and Venezuela.

Following the Russian invasion of Ukraine, finding an alternative to Russian oil and natural gas is now a top priority for energy importers. As US President Joe Biden has ordered a ban on Russian oil imports, Venezuela has emerged as an alternative in the US energy market; last month, several US delegations considered the feasibility of importing Venezuelan oil. There was even talk of lifting some of the sanctions on Venezuela. Market sources have even raised the possibility of replacing Russian oil and gas with supplies from Iran. However, it should be pointed out that Iran does not have the capacity to increase production and export levels. In any case, Iranian oil is already sold on the international energy market.

In truth, Venezuela is unlikely to become an alternative source of energy to replace Russian oil in the US market. Despite the exploratory talks and geographic proximity between Washington and Caracas, there are still too many issues to deal with. “Meanwhile, both Iran and Venezuela still have an agreement whereby we send them a blend of oil while we get condensates from Iran to try to produce more gasoline,” explained Jose Chalhoub, a Venezuelan political risk and oil analyst.

Until the 1970s, Venezuela’s refineries were constructed and run by US and European oil companies. The state-owned Venezuelan Oil and Gas Company (PDVSA) was dependent on US technology, particularly for maintenance, parts and expansion. We can assume that Iran will have to produce spare parts itself.

Investments have not been made in Venezuelan refineries since 2014, following the drop in oil prices and revenues. Thus, their general condition has deteriorated. The country’s oil production has quadrupled during this period, reaching 620,000 barrels per day; foreign debt has risen to $150 billion.

In recent years, Russian energy company Rosneft has seen two of its active subsidiaries in Venezuela sanctioned by the US. Combined with falling oil prices, this has meant that the company’s stock value has almost halved. Rosneft has since announced that it would suspend all operations in Venezuela, which now faces a gasoline crisis.

In December 2020, Venezuela announced plans to encourage private companies to increase trade with Iran and Turkey in order to reduce the effect of US sanctions on its economy. Deals with Asian and Middle Eastern companies are also being encouraged. The government in Caracas also plans to strengthen commercial relationships with such countries as Turkey and Iran, which have already been providing Venezuela with food and fuel.

READ: In the new Great Game, can Venezuela negotiate an end to deadly US sanctions?

The Trump administration monitored the shipment of Iranian fuel to Venezuela closely. It was reported by the US Justice Department that a multimillion-dollar Iranian fuel shipment destined for Venezuela was seized by federal agents; it was said to be the largest such seizure that had ever happened. As Tehran and Caracas tried to circumvent US sanctions, the US seized a total of 1.1 million of barrels of oil from four foreign oil tankers with the support of its allies.

During an official visit to Venezuela, Iranian Oil Minister Javad Owji met with President Nicolas Maduro and his Venezuelan counterpart Tareck El Aissami. According to Maduro, “It was a constructive meeting to deepen brotherhood ties and cooperation in the field of energy… I also reiterated my appreciation for the Iranian people and my love for them.”

The editorial advisor of Attaqa, an energy-focused media platform, said that Venezuela has taken a leaf out of Iran’s book on how to circumvent sanctions, which has worked well for both countries. “Iran has excess petroleum products and Venezuela needs them,” added Dr Anas Alhaji.

Tehran and Caracas look set to continue in their respective foreign policies, which are contrary to Washington’s interests. Aside from Iranian oil going to Venezuela, the two countries can also exchange technology, because they are aware that the expertise and resources of their domestic companies cannot fulfil their respective requirements. Nevertheless, unless the issues with the US are resolved, they will see a decline in their global energy role. That will have an effect on their international relations. Energy can become the axis of cooperation between Iran and Venezuela.

It was announced last October that a 20-year Comprehensive Economic Cooperation Plan between Iran and Venezuela would be prepared quickly. Venezuelan Foreign Minister Felix Plasencia made an official visit to Tehran and met his Iranian counterpart, Hossein Amir-Abdollahian. The latter took the opportunity to condemn the US for extraditing Alex Saab, one of Maduro’s closest advisers. Amir-Abdollahian mentioned several prior agreements on a variety of issues to express the cooperative relationship between the two countries. Plasencia visited Iran soon after Reuters reported that an Iranian super tanker was carrying two million barrels of heavy crude oil from a state-run oil company in Venezuela.

With the suspension of the nuclear talks in Vienna, it seems that Iran has found an opportunity to boost its relations with Venezuela. Caracas needs to invest heavily in its dilapidated energy structure if it is to become a supplier of oil to the US. This will require US sanctions to be lifted and for Caracas to adjust some of its regional policies.