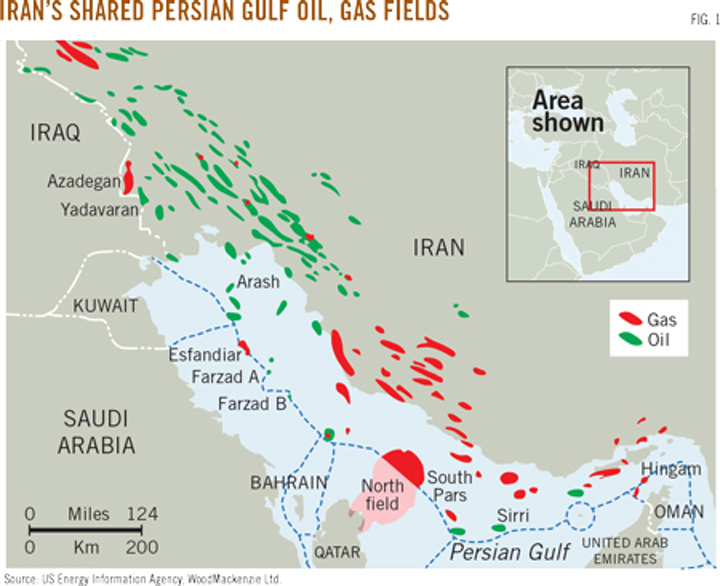 Iran shares 26 oil and gas fields with its neighbors yet, due to a lack of technological and financial investment over the past years, Iran has been unable to extract a competitive amount of oil from such fields. This has led to their exploitation by Iran’s neighbors. Studies show that around 20 percent of Iran’s recognized oil reserves and 30 percent of its natural gas reserves are in joint fields.

So far, Iran has only been able to procure from ten of these 26 fields. Despite an increase in productivity in these fields – most notably in the South Pars, in the Persian Gulf – the Rouhani Administration has failed to acquire the capital and foreign technology needed to compete with, let alone acquire an edge over, neighbors in terms of procurements.

The majority of Iran’s joint oil fields are located on the Iraqi border – Iran shares at least five oil fields with Iraq. Iraq, for its part, has a seven-year plan to increase oil production capacity and reach 1.2 million barrels per day (bpd). Its focus has been on those fields it shares with Iran and, in 2010, the Iraqi government invited Iran to invest in joint fields with the aim of increasing production and developing an equal production capacity.

However, Iran was unable to invest more in these joint fields due to a lack of financial resources. During the period in which heavy sanctions were placed on the Iranian energy sector, Iraq produced 295,000 bpd from joint fields with Iran, yet Iran was able to produce a mere 130,000 bpd in the same period. Iraq also managed to sign agreements with major international oil companies to increase its share from joint fields with Iran. Iraq revised oil contracts and added new conditions in order to attract oil companies, offering increased benefits in return for technological know-how and investment. Iraq’s new contracts are more attractive for oil companies, while the fields themselves are geologically favorable for procurement. Iraq has a program to increase oil production from joint areas shared with Iran.

Iran has no production capacity in its fields in the Caspian Sea, where it has two oil fields shared with Azerbaijan and Turkmenistan. Both countries plan to increase production from these fields and Iran will be not able to attract the foreign technology and capital needed to benefit due to US sanctions.

Qatar has also become a major exporter of liquefied natural gas, with a lot of investment in foreign technology and gas production focused on the South Pars. Given that the South Pars field has been Iran’s top priority, over the past five years Iran has at least succeeded in increasing procurement through investment here. In March 2017, Iran drew a competitive 250,000 bpd from the South Pars, with Qatar drawing 300,000 bpd over the same period.

Iran and Saudi Arabia share four oil and gas fields. By 2017, Iran’s oil production from the Forouzan oil field – also in the Persian Gulf – numbered between 38,000 to 40,000 bpd, while the Saudi side has far outstripped its rival with a production capacity of 400,000 bpd from this field. Similar imbalances are apparent in all shared fields in this area.

Joint oil and gas fields are important for all countries in the region, with all countries which share oil and gas fields with Iran gaining billions from their procurement. The US withdrawal from the JCPOA (Joint Comprehensive Plan of Action, more commonly known as the Iran nuclear deal) has motivated many regional rivals to accelerate their activities further. Since major foreign oil firms have abandoned Iran in response to the now-ineffective agreement, these firms have similarly sought activities elsewhere in the region. Unconfirmed reports so far state that around $6 billion worth of gas has thus been lost to competitors. Any delay in the development of joint fields will thus cause irreparable losses for the country. Experts warn that any delay in signing contracts for foreign investment will hinder the development of joint fields and will help the neighboring states to plunder Iranian oil reserves.

Cooperation between Iran and neighboring Arab countries in the development of plans for joint fields could provide the basis for increased security and stability in the region. Moreover, foreign investments are important for Iran in recovering its oil and gas production capacities. Iran’s huge oil and gas reserves can play a key role in the world energy market yet, as expected, with the withdrawal of the United States from the nuclear agreement the Iranian energy industry faces yet more challenges in attracting foreign investment and technology. After the removal of sanctions, Iran plans to create conditions for attracting foreign investors by drafting new oil contracts. Iran has repeatedly stated that it needs $2 billion of foreign investment to revive its oil and gas production capacity.

Considering developments in the energy market and US sanctions, attracting foreign investment and technology to the Iranian energy industry will be tougher than ever. Achieving the goals of the country’s Sixth Development Plan and Twenty-Year Development Plan is possible only with foreign investment, which requires a reduction of political risk in the country. In the event of a reversal of fortunes in terms of foreign policy and the provision of other requirements for foreign companies, capital can be expected to pour in – particularly from Russian and Chinese companies.

A change of attitude in foreign policy and an attempt to eliminate tensions with neighboring countries will be an important step towards attracting foreign investors. An increase in the oil and gas production capacities of the country is a short and mid-term priority for Iran’s Oil Ministry. Yet Iran must resolve political tension with its neighbors and also negotiate with the West too if these goals are to become workable.