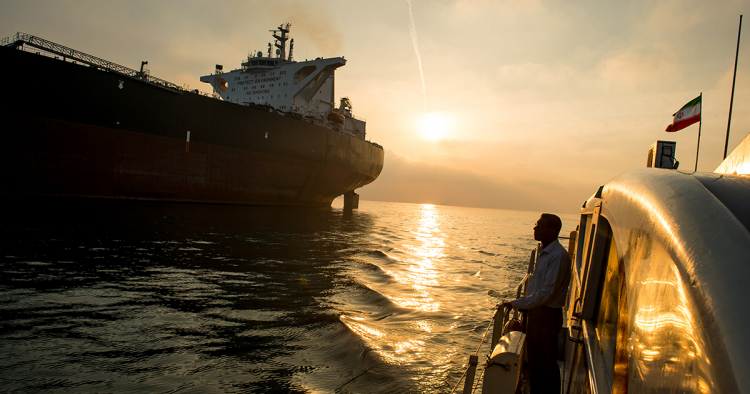 Sanctions have had a devastating impact on Iran’s oil production and exports, preventing much-needed investment in the country’s ageing fields and barring it from legally exporting crude oil to global customers. Using a range of evasion tactics, however, Iran has succeeded in circumventing sanctions and maintaining a steady — albeit much lower — level of crude exports. The Gulf’s complex regional oil market has facilitated these tactics, providing the perfect environment for trade in oil that U.S. sanctions designate as illicit. Iran has cleverly exploited the Gulf’s crowded shipping lanes and labyrinths of production facilities and trading hubs to obfuscate and conceal the origin of its oil, allowing it to sell its crude to buyers in China, Syria, Venezuela, and elsewhere. Until oil sanctions are lifted as part of a diplomatic agreement on Iran’s nuclear program, the country will likely continue to exploit this illicit trade to generate billions of dollars in revenue for the government.

In May 2018, the Trump administration withdrew from the Joint Comprehensive Plan of Action (JCPOA) nuclear agreement and implemented a campaign of “maximum pressure” that included crushing sanctions on Iran’s energy, shipping, insurance, and banking sectors. The campaign aimed to reduce Iran’s oil exports to zero. It got close: The country’s oil exports fell by almost 90% from 2.3 million barrels per day (bpd) at the beginning of 2018 to a mere 260,000 bpd by October 2019. Iran, however, had other options to get its oil on the market.

Following decades of sanctions and embargoes since the 1979 Islamic Revolution, Iran has mastered the art of smuggling and sanctions evasion. Since the U.S. first banned imports of Iranian oil following the U.S. embassy hostage crisis in 1979, Iran has developed a range of tactics to ensure that its oil reaches international buyers. While these sanctions evasion tactics are numerous and diverse, they generally fall into four categories, including: storing oil in large tankers at sea while identifying potential buyers willing to purchase the illegal oil; changing vessel names and identification codes to obfuscate the identify of its oil tankers; making its vessels go “invisible” by disengaging ships’ Automatic Identification Systems; and secretly moving oil through ship-to-ship transfers to other, licit vessels. Key to the success of these tactics, however, has been the complex landscape of the Gulf’s oil industry.

The Persian Gulf is the epicenter of the global oil trade. The eight countries that border it together possess around 50% of global oil reserves, and over 20% of global oil consumption passes through the strategic Strait of Hormuz chokepoint. Iraq and the UAE serve as key nodes in the complex regional oil industry and network of infrastructure, corporate entities, oil tankers, and other elements that have facilitated Iranian sanctions evasion.

Iran’s oil smuggling process often begins in the Shatt al-Arab/Arvand Rud river that separates it from Iraq — an area that saw conflict during the brutal eight-year Iran-Iraq war. Satellite images show the complexity of Iraq’s southern oil-producing region neighboring Iran — an area that exports around 2.6 million bpd of Iraq’s crude. Networks of oil refineries, storage tanks, production sites, and export terminals litter southeast Iraq and southwest Iran near and along the river that separates the two countries. Dozens of cargo ships, small vessels, fishing boats, and large oil tankers are either moored in these waters awaiting new shipments of Iraqi and Iranian crude or simply passing through. Iran has capitalized on this complex and poorly regulated area to covertly push its oil to international markets.

According to U.S. government officials, Iran is exploiting this waterway and the coastal region around Iraq’s al-Faw Peninsula to conduct ship-to-ship transfers and blend cargoes of Iranian crude with bulk cargoes from other countries. Through blending, Iran can obfuscate the oil’s origin, making it far more difficult for shipping companies and government authorities to detect the presence of sanctioned Iranian oil. Forged bills of lading, poor state governance, and endemic corruption at Iraqi ports — as well as Iran’s deep network of proxy forces and allies in the Iraqi government — help facilitate these tactics, making it a lucrative and lower-risk option that Iran increasingly uses to send its oil to willing buyers.

The UAE, a major global trading hub for commodities such as crude oil and other refined products, and a transshipment point for much of the region’s oil, also provides fertile ground for further concealing the origin of oil and reaching global markets. The UAE has long been a focal point in global illicit finance and trade activity, including sanctions evasion practices, with rogue actors using the country as a base to bypass sanctions. Each day, hundreds of oil tankers and other cargo ships traverse the UAE’s coastlines, awaiting new cargoes of oil, refueling, or offloading products at one of the country’s several large ports. In the UAE’s east, the Port of Fujairah hosts the largest oil terminal in the Middle East, providing maintenance support, bunker fuel, and oil cargoes for thousands of ships each year. With so much activity, tracking the Iranian oil that passes through has proved difficult.

Iran’s exploitation of the UAE to export its oil has attracted the attention of U.S. authorities. In February, after receiving a tip-off from the ship’s Greek owners, the U.S. government seized the Achilleas, a tanker carrying around 2 million barrels of crude. According to reports, the oil was offloaded from another ship near Fujairah in the UAE onto the Achilleas, with U.S. officials alleging that Iran disguised the oil to make it appear as though it came from Iraq. In an interesting twist, the ruler of Fujairah, Sheikh Hamad bin Mohammed al-Sharqi, made a claim to the seized oil, stating that his company, Fujairah International Oil and Gas Corporation, purchased it legally from Iraqi suppliers. While the true origin of the oil remains a mystery, the case brought the murky and intertwined nature of the region’s oil trade, and the opportunities that it can provide for Iran to evade sanctions, to the fore.

The spoils, by the numbers

Iranian sanctions evasion practices have caught the attention of U.S. and international authorities. In May 2020, the Department of the Treasury released a 35-page document providing guidance to “address illicit shipping and sanctions evasion practices,” including seven recommendations for industry. In addition to the Achilleas, U.S. authorities have seized other ships they claim had been transferring Iranian oil to Venezuela. Yet despite these efforts, indications suggest that Iran’s sanctions evasion tactics have helped it successfully continue — and even increase — oil exports on the gray market.

While Iran sends some of its oil to Syria, Venezuela, Iraq, and other regional countries, it ships a significant portion of it to buyers in China. Indeed, China’s motivation in purchasing Iran’s sanctioned oil likely has as much to do with an economic need as it does its geopolitical objective of undermining U.S. sanctions and economic dominance. Kpler, a commodities data intelligence firm, estimated that Iranian exports would reach nearly 900,000 bpd in March, more than doubling from 406,000 bpd in February. With a heavy discount on Iran’s high-risk, illegal oil exports, buyers in China are purchasing so much that oil tankers are “clogging up” ports in the country. Identifying the oil’s true origin is difficult, however, as it is often imported “indirectly,” first passing through transshipment hubs in the UAE, Malaysia, and Oman, or simply relabeled as “Middle Eastern” oil. While it is difficult to determine how much Iran makes from these sales, some estimate total oil revenues for the country of around $5 billion in 2020 — better than nothing, but nonetheless a significant decline from the $53 billion that it earned in 2017.

Ultimately, a return to the JCPOA and lifting of U.S. unilateral sanctions would open the global oil trade for Iran to export legally, rendering covert sanctions evasion tactics unnecessary. But as negotiations between the two countries continue in Vienna, the outlook remains unclear. On May 1, Iran’s lead negotiator Abbas Araqchi seemed to suggest that negotiations were moving forward, and that removal of sanctions on Iran’s energy, banking, insurance, and shipping sectors would be part of any signed deal, “based on agreements reached so far [in the negotiations process].” An unnamed U.S. official then stated on May 6 that a deal could be reached in “the next few weeks,” but that it is “ultimately a matter of a political decision that needs to be made in Iran.” Yet until an agreement is reached, Iran will undoubtedly continue to leverage sanctions evasion tactics and use its neighbors to get its crude to oil-thirsty customers around the world.

Brett Sudetic is a national security consultant and an advisor to Gulf State Analytics, a geopolitical risk consultancy focused on the Middle East and North Africa.

Omid Shokri, PhD is a visiting research scholar at George Mason University’s Schar School of Policy and Government and an analyst with Gulf State Analytics. He is the author of the recently published book, “US Energy Diplomacy in the Caspian Sea Basin: Changing Trends Since 2001.” The views expressed in this piece are their own.

Chabahar port could become a significant commercial outlet serving these countries, and it could also …