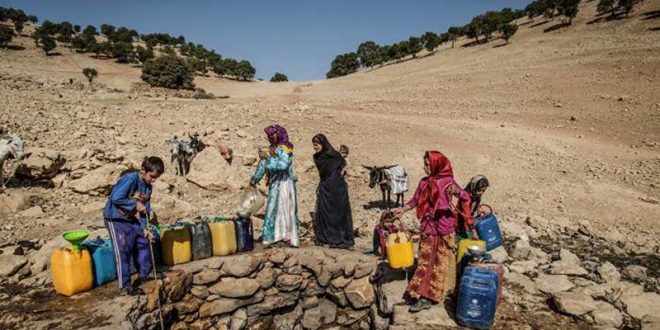 Iran is on the fast track to severe water scarcity. This semi-arid country, which has stressed the role of agriculture in assuring its economic independence, faces an onslaught of threats to its water supply, including climate change, population growth, mass migration, political instability, and resource mismanagement. Tehran, the capital and largest city, could soon be the epicenter of this crisis. As Iran’s rural areas exhaust their water resources, more and more rural residents are expected to crowd into the capital, intensifying the shortages there.

Iran uses about 90 percent of its water resources for agriculture. About 71 percent of Iran’s eighty-two million population lives in areas at risk of subsidence due to over-extraction of groundwater resources, and 70 percent of water demand in Iran is also related to these areas.

The water crisis has reached such a severe juncture that Iranian authorities cannot deny it. Energy Minister Reza Ardakanian recently warned of water shortages this summer, calling this year “one of the driest years in five decades.”  While Ahad Vazifeh, an official at the country’s meteorological organization’s center for drought, announced on June 15: “Bluntly speaking, there is no water.” He noted that some parts of the country, particularly in the southern and eastern regions, had a 50 to 85 percent reduction in precipitation this year.

But a drastic drop in precipitation isn’t the only contributing factor to the water shortage crisis. There are also temperature rises of 2-3 Celsius that have depleted snowpack and dried up rivers and there has been an increase in average water consumption in cities like Tehran. Mohammad-Reza Bakhtiari, the managing director of Tehran Province Water and Wastewater Company, said: “It’s a very heavy warning,” referring to the reduction of snow reserves around Tehran. Due to the drought, there have been abrupt power cuts in various cities recently, including the capital, in part caused by insufficient hydropower generation. Some of the blame has been put on “illegal” cryptocurrency mining, but that is just one of many factors causing rolling blackouts.

These factors have prompted tensions between the Iranian government and its citizens, which are being intensified by its weak management of dwindling water supplies. In the last two decades, civil unrest has been attributed to water shortages. There have repeatedly been protests around Lake Urmia, located west of the city of Tabriz—once known as the second largest saltwater lake in the world—over excessive dam construction and withdrawal of groundwater. The 95 percent decrease in water volume entering Lake Urmia since 2001 and the lack of water during the wet years of this period have caused serious concerns in the path to revitalizing this lake. Currently, Lake Urmia’s water level has dropped 38 cm in comparison to the same period last year.

Last May, villagers in the town of Meshg in Shahr in northwestern Ardabil province closed the village road to protest the lack of drinking water. In July 2020, the people of the southwestern cities of Abadan and Khorramshahr and Borazjan in southwestern Bushehr province also took to the streets to protest the water shortage and the drinking water crisis. In recent weeks, this problem has been raised many times in Iranian social networks and media, but the Iranian government has not presented a specific program to resolve the water crisis in Iran.

In March 2018, near Esfahan and southwestern Khuzestan province, farmers protested after rural water resources were diverted to the districts of leading politicians. Proposed projects by authorities, such as transferring water from the Caspian Sea and Persian Gulf to central provinces, will only increase tensions between the provinces. Environmental experts believe that such projects will harm the environment. Additionally, there will also be setbacks in the government’s efforts to decrease dependence on declining underground water reservoirs, as farmers continue to construct illegal wells with the drop in precipitation.

It’s worth noting that oil production increases have added to the water crisis in fields shared with Iraq west of Karun on the Hoor al-Azim wetland and in Khorestan province. Iraqi Minister of Water Resources Mehdi Rashid al-Hamdani recently announced that an official Iraqi delegation would travel to Tehran to investigate the dispute between the two countries over shared waters.

The water crisis has also been a chronic concern for Iran’s neighbor to the east, Afghanistan. There have been conflicts over the Helmand River and Hamoun wetlands in southeast Sistan-Baluchestan province, which have turned into a sea of sand in the last fifteen years. In March 2020, Afghan President Ashraf Ghani announced that Nimroz would become a water reservoir for Afghanistan and Iran at the opening ceremony of a dam. Afghanistan’s water will now be sent to Iran in exchange for oil, he said.

The water crisis has also pushed more migration from rural to urban areas, where uneducated workers fail to find jobs and swell the ranks of those willing to join protests, such as those that occurred in Iran between 2017 and 2018, which were partly driven by climate refugees.

Iran’s Interior Minister warned in July 2018 that Iran was at on the verge of a serious social crisis, namely climate migration, which could create a dramatic change in the social nature of Iran over the next five years. The concentration of industries that consume a lot of water in provinces that do not have sufficient water resources is the result of poor policies, some of which predate the revolution. However, the reality is that much of today’s problems are the direct result of government mismanagement and corruption.

The Islamic Republic’s failure to deal with the water crisis presents an urgent issue for President-elect Ebrahim Raisi. The Hassan Rouhani administration has blamed US sanctions as one of the main factors for Iran’s environmental problems, but that excuse will fade if Iran and the US return to compliance with the 2015 nuclear deal. Only by redefining Iran’s agricultural policy and improving water conservation can Iran begin to resolve this worsening crisis.