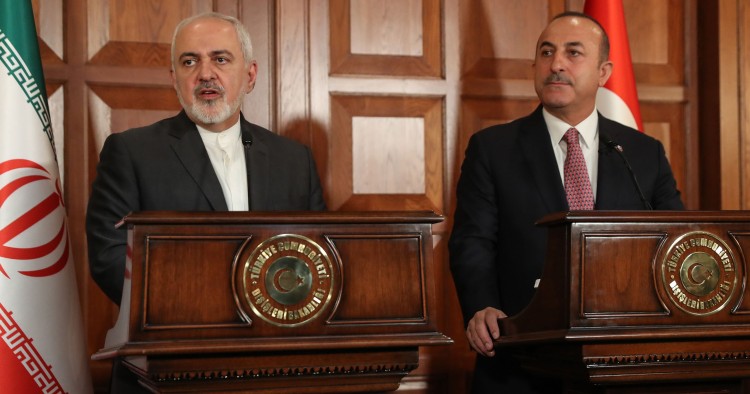 Turkey and Iran should be natural partners when it comes to energy.

US sanctions and the future of Turkish-Iranian energy ties

On paper, Turkey and Iran should be natural partners when it comes to energy. On the one hand, Turkey has a growing demand for oil and gas and lacks significant domestic resources, making it highly reliant on imports. On the other hand, Iran has huge hydrocarbons reserves — the world’s fourth largest for oil and second largest for gas, according to the U.S. Energy Information Administration. In reality though, things are more complicated. Energy relations between the two countries are not without their challenges, foremost among which are U.S. sanctions on Iran and disputes over pricing, although there is also a strong opportunity for greater cooperation in the form of Turkey’s efforts to become a regional energy hub.

At present, Iran is one of Turkey’s leading suppliers of oil and gas. According to figures from the Turkish Energy Market Regulatory Authority (EMRA), as of January 2019, Iran was Turkey’s third-largest source of oil imports by volume, accounting for 12.35 percent of the total, behind Iraq (23.5 percent) and Russia (15 percent). It was also Turkey’s second-largest supplier of natural gas, accounting for just over 14 percent of the total, behind Russia (31.6 percent) and narrowly ahead of Azerbaijan (13.9 percent) and Algeria (12 percent).

U.S. sanctions
The reimposition of U.S. sanctions on Iran in October 2018 has presented an immediate and obvious hurdle to Turkish-Iranian energy ties. In the aftermath of the U.S. move, Turkey’s purchases of Iranian crude oil reportedly fell to zero, according to news reports. Since then, however, they have picked up again. Turkey was one of eight countries that received a temporary sanctions waiver enabling it to continue buying Iranian crude for a limited period of time, on the condition that it work to reduce its imports of Iranian oil and find alternative suppliers. The waivers are currently set to expire in May, and it is unclear as yet if the Trump administration will extend them. Nevertheless, the trend when it comes to oil imports from Iran is clearly downward: According to figures from EMRA, they fell by nearly half from January 2018 to January 2019, from 22 percent of total imports to 12.35 percent.

Pricing dispute
Pricing has long been a bone of contention between Turkey and Iran when it comes to energy. Under a 25-year agreement signed in 2001, Iran exports 10 billion cubic meters of gas annually to Turkey at a price of $507 per thousand cubic meters. Turkey first objected to Iran’s prices in 2009, when it said they were too expensive and demanded a discount. Soon after, an arbitration court granted Turkey a 12.5 percent discount on the original price. In 2012 Turkey took action against Iran again, suing it for overpricing on gas sales, and in 2016 the International Court of Arbitration (ICA) ruled against Iran in its dispute with Turkey. After reviewing the case, the ICA ordered Iran to reduce its gas prices by 13.3% by the end of 2016 and pay $1.9 billion in compensation to Turkey due to overpricing.

Iran’s gas prices are indeed much higher than those of its competitors, Azerbaijan and Russia, making it unlikely that Iran will be able to maintain its share of Turkey’s energy market unless it takes action. The current natural gas contract between the two countries is set to expire in 2026, and Turkey is planning to construct infrastructure to boost imports from Azerbaijan and Russia in regions of the country that primarily consume Iranian gas at present. Considering these factors, if Iran wants to maintain its role as a key natural gas exporter to Turkey and extend the existing contract past 2026, it will need to offer additional discounts or other incentives.

Turkey’s efforts to become a regional energy hub
One major potential opportunity for closer cooperation is Turkey’s ambitions of becoming a regional energy hub, leveraging the country’s geography and pipeline network to serve as an energy corridor between the oil-and-gas-rich states of Central Asia and the Middle East and the major consumer countries in Europe. If Turkey can put in place the required infrastructure and liberalize its energy market, this goal may be achievable, and energy imports from Iran could help it to realize this objective.

In line with its broader aim of becoming a regional energy hub, Turkey is working to diversify its oil and gas supplies as a central part of its energy policy. At present, the country is planning to import more natural gas through projects such as Turk Stream, an undersea gas pipeline running from Russia to Turkey. Liquefied natural gas (LNG), primarily from Qatar and the U.S., is also playing a growing role in the Turkish energy market. Imports from the latter jumped from nothing to nearly 8 percent of the total in just one year, from January 2018 to January 2019, according to figures from EMRA.

In theory, Iran could play a greater role here as well, but boosting the volume of Iranian gas exports to sell on to other countries would not be easy. Iran needs foreign technology and financing to increase its production, but due to U.S. sanctions neither is likely to be forthcoming until Iran can solve its problems with the West over its nuclear program, missile tests, and human right issues. In addition to addressing its geopolitical problems, Iran also needs a legal framework that would help to attract foreign investment. Without foreign energy firms and foreign capital, Iran will be not be able to produce more oil and gas for export. It will also need to address the issue of reliability, which has long been a problem with Iranian gas exports. If the country is to play a greater role as a supplier, it needs to guarantee that it will not cut the flow of gas, especially in wintertime.

Despite their proximity and complementarity as producer and consumer, Iran and Turkey face considerable, if not insurmountable, hurdles to closer cooperation on energy. If they can manage to overcome the challenges associated with U.S. sanctions and pricing and leverage the opportunities presented by Turkish efforts to become a regional energy hub, the two may well be able to finally make the most of what should be a natural partnership.

Omid Shokri Kalehsar is a Washington-based senior energy security analyst, currently serving as a visiting research scholar in the Schar School of Policy and Government at George Mason University. Omid is a PhD candidate in international relations at Yalova University, Turkey. The views he expresses are strictly his own.