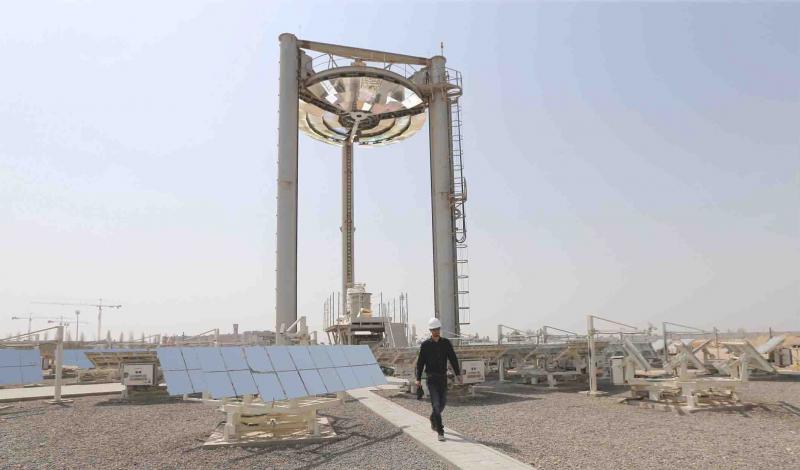 Countries across the world are planning to increase the share of renewables in their national energy baskets, particularly to generate electricity. The United Arab Emirates has an ambitious plan to become a leader in the Middle East in reducing reliance on fossil fuels and increasing renewable energy production.

The United Arab Emirates intends to expand the use of new energies in pursuit of such goals as exploiting renewable resources that are not oil-dependent. The Emirates has become a hub for clean energy technology, providing funding to build renewable energy projects around the world and investing millions of dollars in fundamental research on energy, water, microelectronics, advanced materials and transport systems.

The UAE serves as a model for renewable energy sector. Masdar Abu Dhabi, for example, a regional leader and international player in renewable energy and sustainable urban development, has invested more than $2.7 billion in clean energy development since 2006.

MENA countries with huge oil and natural gas reserves are looking to increase the use of renewable energy. Some have the potential to export electricity generated by renewables and decrease dependency on revenue from exported oil and decrease greenhouse gas emissions. Studies suggest that electricity generated from renewable sources is cheaper than power produced from fossil fuels.

The UAE State of Energy Report 2015 said the share of power generated from natural gas will drop from 98% in 2012 to less than 76% in 2021, as clean energy enters the mix and energy efficiency grows.

The United Arab Emirates has a clear, ambitious target for clean energy and is joining other countries to maximise clean energy use. It is likely to become one of the world’s leading solar power producers because sunlight is one of the natural advantages of the country.

Studies indicate that, if the UAE reaches its renewable energy goals, it could save $192 billion by 2050 in the energy sector.

More than in any other city in the United Arab Emirates, Dubai is seeking to become a Smart City, focusing on the use and development of clean energy. Dubai recently initiated its “Clean Energy Strategy 2050” initiative, which is designed to increase Dubai’s green and clean energy share by 75% by 2050.

Dubai officials stressed their commitment to creating a sustainable model for energy conservation and supporting economic growth without harming the environment and natural resources. The project, estimated at $13 million, is “scheduled to provide up to 7% of Dubai’s energy from clean sources in 2020, which will increase to 25% in 2030 and to 75% in 2050,” a UAE government report stated.

Last May, Dubai began the second phase of what will be the world’s largest solar park. Worth some $14 billion, the park will eventually produce 5,000 megawatts (MW) of energy, providing power for about 800,000 households.

Meanwhile, a French power company and Masaood Abu Dhabi jointly offered to construct a 300-MW photovoltaic power plant to produce power at 1.79 cents per kilowatt-hour, which would be the cheapest rate at which electricity has ever been produced in Abu Dhabi.

The United Arab Emirates is determined to find a clean replacement for natural gas, helping both the environment and its budget. By 2050, the UAE will have invested approximately $150 billion in renewable energy. This is expected to save the country $192 billion through reducing dependence on gas subsidies.

The Masdar city project is one of the UAE’s most important renewable energy-based projects. Begun in 2006 as a wholly owned subsidiary of the state-owned Mubadala Development Company and guided by Abu Dhabi Economic Vision 2030, Masdar aims to develop clean technology and future energy solutions in terms of design, innovation, research laboratories and implementation.

Masdar operates through four interconnected business units and a research division that complements their work. With $2.7 billion put towards clean energy development in the past decade, the project functions as an investment model for other cities.

The UAE government plans to invest $340 million in sustainable development efforts in developing countries. Abu Dhabi has invested some $46 million in renewable energy projects in Africa and the Caribbean.

In addition, Emirates Company is the host and official partner of the Solar Impulse 2 project, a plan to fly a solar-powered aircraft around the world without the use of fossil fuels.

Abu Dhabi is one of the most important examples of a city that is creatively seeking to strengthen its renewable energy sector. By 2030, the city is expected to contain about 40,000 inhabitants and the project will create more than 50,000 jobs there.

As solar energy gains traction throughout the world as an inexpensive source of energy, countries with high solar indexes are looking to reassess their energy strategies. Increased investment by the Emirate government and private energy firms in other countries gives the United Arab Emirates an opportunity to be a key player in renewable in the region.