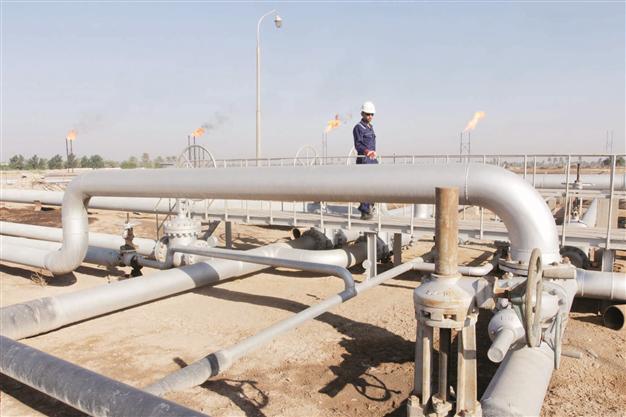 إaghdad reported its highest oil production on record last August at 4.6 million barrels per day (bpd) from the country’s southern fields and exported a large portion of it.

The first Iraqi-Turkish oil pipeline, built in 1976, has been ineffective in recent years in northern Iraq. Now the governments of Turkey and Iraq, the Organization of the Petroleum Exporting Countries’ (OPEC) second-largest oil producer, have arrived at the conclusion that a new pipeline for the transportation of oil to the central parts of Iraq is needed. The Kurdish Regional Government (KRG) currently exports more than 400,000 bpd of crude oil.

Iraq’s new oil minister, Samir Al-Ghadhban, said in his first working day last week that Baghdad was planning to resume talks with Kurdish officials on oil exports. Kirkuk’s cargo transportation to Iran by truck was halted by U.S. sanctions three weeks ago. Kirkuk was exporting oil through the Kurdish-controlled pipeline until the dispute over oil payments between the central government and the KRG halted exports.

In official contacts with Iraq, the Minister of Energy and Natural Resources Fatih Dönmez held a meeting with Samir Al-Ghadhban, the Iraqi oil minister. Following this meeting held in Baghdad, the two ministers appeared before the press. The Iraq-Turkish Crude Oil Pipeline has the potential to provide the oil produced in the north of Iraq in the most secure and the fastest way to the markets and has the prospect of extending its markets, primarily to the Mediterranean region over the terminal in Ceyhan. Actually, with the minister today, we found the opportunity to discuss and evaluate numerous new projects.

The Iraq-Turkey Crude Oil Pipeline has the capacity to undertake the major function of transporting to the market not only the crude oil in the north of Iraq but also the crude oil drilled from other regions of the country. They talked about the new projects and we gave positive reactions to these.

After talks with Iraqi Prime Minister Adel Abdul-Mahdi, President Recep Tayyip Erdoğan said the talks emphasized the need to reopen the destroyed Kirkuk-Ceyhan pipeline as soon as possible. Referring to the importance of Mahdi’s visit to Turkey, Erdoğan said that during the meeting they discussed all aspects of the two countries’ relations. Erdoğan stressed Turkey’s readiness to meet Iraq’s electricity needs in the short term, stressing that the two countries have great potential for cooperation. Erdoğan further stated that to continue fighting Daesh, the PKK and the Gülenist Terror Group (FETÖ) would be effective in signing a military agreement and good faith. They will have a meeting with their Iraqi audience.

Mahdi emphasized in an interview that they would not approve of any security threat from their own country against Turkey, and emphasized the increased cooperation between the two countries. Mahdi noted that with joint plans, the volume of trade could increase: The two countries can jointly take steps in the fight against terror and poverty.

Erdoğan stated that Turkey made significant progress in economic, local institutions, defense industries, and that Iraq wanted to use those.

A common approach on the electricity line issue

Iraqi Oil Minister Al-Ghadhban also remarked that the Iraq Prime Minister Adil Abdul-Mahdi visited Turkey, together with the crude oil and gas board, to hold a meeting with President Erdoğan.

Al-Ghadhban, who stated that they were following up on and discussing the implementation of the decisions taken during Minister Dönmez’s visit, said, “During the meeting, we focused particularly on the commercial activities between the two countries and on the development of their relations to the maximum level in the area of energy. In addition, we also discussed the operations of Turkish companies. During the meeting, we, with the consent and approval of the Iraq government, expressed the intention of the Iraq Crude Oil Ministry to Mr. Dönmez. This intention is constructing a new crude oil pipeline along the old route to transport Iraq’s crude oil from Kirkuk to the Turkish border. A common approach is also existent with respect to the construction of an electricity line between the two countries. The honorable minister will discuss this issue in detail with the Iraqi electricity minister.”

In recent years, U.S. and European companies have been able to further enhance the development process of Iraqi Kurdistan and southern fields by creating a competitive environment for the presence of northern and southern Iraqi fields.

The move is reflected in Iraqi oil deals both north and south of Iraq, with the inclusion of more prize money and more

money per barrel. Northern Iraq’s oil swap is a subject both Iran and Turkey are keen to do on their own soil, both considering its significant revenue and profitability as well as geopolitical issues.

The swap contract was previously scheduled to become operational by the end of January 2018, Kirkuk oil swap talks go back to Iran years ago, when northern Iraqi oil fields were swapped only through Turkey, and Iraq was thinking of cheaper ways and creating a competitive environment. Earlier negotiations between the two countries had even suggested that a new crude oil pipeline from Kirkuk to Kermanshah be built, replacing the oil swap route from Turkey, but the idea has not come up to date.

Turkey has entered negotiations to maximize the potential and actual potential of Iraq’s oil swap for political and economic benefits, but Iranian oil officials appear to be executing the same deal, which will be done so by tankers. The stable infrastructure is sufficient because the two countries do not invest in the construction of a new oil pipeline between Kirkuk and Kermanshah. Some analysts claimed that the construction of the second pipeline was also political because Baghdad was not satisfied with the management of northern Iraq’s oil and Erbil’s control over the previous pipeline, which was why it had begun to build a second oil pipeline.

While Kirkuk oil should be exported to world markets by means of Iran’s agreement with the Iraqi central government, the Iraqi KRG has prepared its infrastructure to export it via Turkey. The pipeline has been upgraded to extend to the Turkish port of Ceyhan and its capacity has significantly increased. The aim of this is to respond to the growth of oil production and exports in the Kurdish region, as well as to the entry of Kirkuk oil into the pipeline. After the Iraqi Kirkuk region was liberated from the occupation of the Kurds and its army entered the strategic city, the control of the Kirkuk oil field, which was previously held by the Kurds, was taken over by the Iraqi central government.

Some experts believe that the issue of crude oil transport in northern Iraq is not a matter of competition between Iran and Turkey. However, this view is fundamentally incorrect. The daily transit of more than 500,000 barrels of Iraqi oil through the pipeline is a matter of oil transit, with 60,000 barrels of oil being delivered daily through Iran to supply refineries, swap or receive oil at specified points and deliver it to its destination. It is natural that these two issues regarding the ways to diversify Iraqi crude oil are important and do not contradict with each other. Hence, assuming such a uniformity and competitiveness cannot be considered a valid argument.

One major potential opportunity for closer cooperation is Turkey’s intention to become a regional energy hub, leveraging the country’s geography and pipeline network to serve as an energy corridor between the oil-and-gas-rich states of Central Asia and the Middle East and the major consumer countries in Europe.