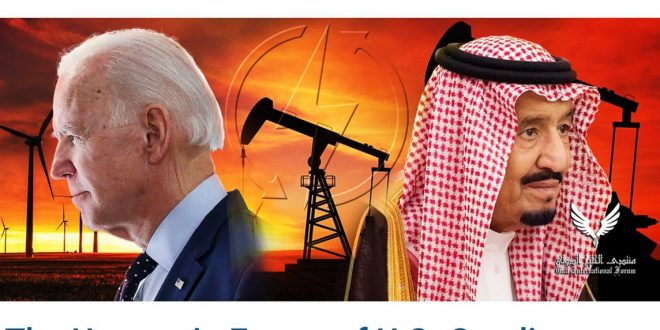 Saudi Arabia is undoubtedly concerned by Biden’s emphasis on addressing climate change since this would mean a drop in the demand for crude oil, the backbone of Saudi Arabia’s economy.

The stability of global energy markets has long been a major factor in U.S. relations with Saudi Arabia. Riyadh’s potential to increase and decrease production as needed, and therefore its role in stabilizing oil prices, and the importance of oil price fluctuations to America’s energy security and economic stability have occasionally led to tension in the relations between the two countries. In 2020, after the outbreak of COVID-19, the Trump administration worked hard to stabilize the oil market by reducing Russian and Saudi oil production. The unprecedented decline in U.S. oil prices in the spring of 2020 caused serious problems for the domestic oil industry and led legislators from the oil-rich states of Texas, Louisiana, North Dakota, and Alaska to accuse Saudi Arabia of economic warfare.

Last August, the Biden administration was putting pressure on OPEC and its partners to increase production to cope with rising gasoline prices. National Security Adviser Jake Sullivan criticized the world’s leading oil producers, including Saudi Arabia, for what he viewed as insufficient crude oil production in the wake of the pandemic. Sullivan’s message highlights the new dynamic between Washington and OPEC following the era of Biden’s predecessor, Donald Trump, who broke with the previous practice of asking OPEC for certain policy changes to cut prices. The Biden administration’s pressure to cut fuel prices comes at a time when it seeks to play a leading role in tackling climate change. Although the president has pushed for a broad transition from fossil fuels to clean energy sources, electric vehicles, and reducing demand for gasoline, Sullivan said that leaving high gasoline prices unchecked would hurt the global recovery and urged the OPEC+ group to do more to support the recovery.

During the struggles to recover from the consequences of the pandemic with regard to the economy, there has been an increasing demand for energy, which constitutes the essence of the crisis. In addition, global energy markets are heavily influenced by unpredictable factors, such as weather conditions; Europe’s natural gas stocks were quickly used up over the winter of 2020-2021 owing to the long-lasting cold period. The increasing demand for energy prevents the restocking process during the spring and summer seasons, posing serious effects for the entire globe.

In late September, the White House announced that Sullivan had traveled to Saudi Arabia, met with Saudi Crown Prince Mohammed bin Salman (MbS), and discussed the war in Yemen. White House spokeswoman Jen Psaki said that the oil issue was also on the agenda. In that week’s meeting, the National Security Adviser and his team stressed the need to create conditions to support the recovery of the global economy. The United States continues to discuss with its international partners, including OPEC, the importance of competitive markets in pricing and further efforts to support economic recovery.

At the same time, President Biden has rejected continued efforts to persuade the OPEC coalition to increase supply. He has stated that he expects next year to see a drop in U.S. gasoline prices. “I do not expect anything to happen in the meantime that will significantly reduce gasoline prices,” the president was quoted as saying. “They want to talk to me, I’m not sure I want to talk to them, but the point is that the subject of the talks is gas production”.

Some experts believed that the relations between Saudi Arabia and the United States, which were overwhelmingly positive during the Trump administration, would experience a negative shift under Biden’s presidency. Saudi Arabia is undoubtedly concerned by Biden’s emphasis on addressing climate change since this would mean a drop in the demand for crude oil, the backbone of Saudi Arabia’s economy. This does not necessarily mean that policies to decrease demand for oil will not be enforced by the U.S.; rather, it means that alternatives for oil will be sought, resulting in oil losing its value to competing alternatives. The power of the Saudis and Emiratis will weaken as oil loses its role as the world’s preeminent transportation fuel. Biden has argued that because of the policies of OPEC and other foreign producers, they should expect higher gasoline prices to continue into next year. “My prediction,” the president said, “is that gasoline prices will start to decrease in 2022 as we approach and enter… next year.” He added that he did not expect a development that would lead to a significant decrease in gasoline prices.

The current energy crisis, which has caused power outages in Europe and Asia, could eventually spread to U.S. utility companies. Power company executives are worried about fuel shortages in the upcoming winter, which could lead to blackouts. Electricity companies are worried that they will not be able to buy enough fuel with their existing assets. The global economic recovery from COVID-19 has led to increased electricity demand and rising natural gas prices, especially in Asia. As a result, utility companies around the world have been forced to use more coal, leading to shortages of coal as well. U.S. utilities are using coal instead of gas, and it is expected that about 23% more coal will be consumed this year compared with last year’s consumption.

At a time when oil prices are very low in the global energy market, Saudi Arabia has finalized a far-reaching deal to temporarily decrease production. Riyadh coordinated the agreement between OPEC and non-OPEC members such as Russia, Norway, Mexico, Argentina, Colombia, Ecuador, Egypt, Indonesia, Norway, Trinidad and Tobago – and the G20 – to achieve two key Saudi goals. First, the deal has helped to provide a framework for other producers, convincing them that they also had a responsibility to reduce oil production so that the oil market could be stabilized. Second, the deal has reinforced Riyadh’s leadership in energy geopolitics.

Negotiating the deal was not an easy endeavor in terms of time and cost. With the outbreak of the COVID-19 pandemic in February 2020, China’s energy demand fell, and the time of the agreement was slightly late, in that oil prices were unlikely to continue to rise over time without outside influence. Thus, Riyadh probably undertook an uncontrollable initiative. However, Saudi Arabia can continue to influence the oil market and OPEC and could help to lower stress on U.S. energy security. Energy and weapons are the two main pillars of Saudi-US cooperation, and an abundant supply of energy could increase the level of cooperation between the Saudis and the Biden administration in the short term.