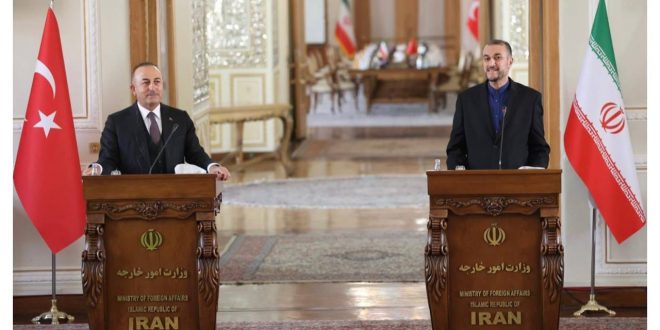 The Iranian-Turkish Cooperation Roadmap: A Solution to Resolving Bilateral Problems and Tensions?

In recent months, Turkey and Iran seized an opportunity to try to reduce their long-running multifaceted tensions. Despite geopolitical and security-related frictions, the bilateral relationship is rosier when it comes to business and people-to-people ties. Iran is among the highest sources of tourists to Turkey every year (Sabah, September 11). And the Turkish Statistics Center reported in October that 7,189 houses were purchased in Turkey by Iranians in 2020—a 25 percent increase over 2019. Moreover, over the past two months, Iranians buying houses and apartments in Turkey broke new records: while citizens of the Islamic Republic have always tended to be among top buyers of real estate in Turkey, they now collectively top the list of foreign investors in the Turkish housing market (Donya-e-Eghtesad, October 20).

Due to the high economic potential between the two countries, Iran and Turkey had pledged to reach a trade turnover of $30 billion by 2015 (Tehran Times, March 28, 2012); but that level was never achieved. Last year, mutual trade amounted to only $6 billion, although that low number was caused partially by sanctions on Iran, the COVID-19 pandemic, as well as customs difficulties. Some rebound is expected this year, with estimates that Iranian-Turkish trade could amount to $10 billion by the end of 2021 (Donya-e-eqtesad, July 15, 2021).

Meanwhile, about four years remain before the expiration of the 25-year contract for the export of Iranian natural gas to Turkey (Farsnews, February 12). Under these circumstances, Baku and Ankara recently signed a new gas contract, according to which the Republic of Azerbaijan will deliver a total of around 11 billion cubic meters more of gas to Turkey by 2024 (Trthaber, October 15). Of course, Iran’s predicament in this sphere is not limited to the growth of foreign competitors. Iran itself faces a daily deficit of 200 million cubic meters of gas this winter. And according to the Iranian Ministry of Oil, the South Pars gas field—which accounts for 75 percent of the country’s gas extraction—will reach peak production in 2023, at which point, production will drop by 10 billion cubic meters every subsequent year (Tasnim, September 11, 2021; Mehrnews February 6, 2016). Ankara is not waiting around for Tehran to resolve its looming export troubles.

One of the most important points of bilateral contention at the moment pertains to water use. Iran believes that the Karakut Dam, built by Turkey on the Aras River, will damage the environment of Armenia, the Republic of Azerbaijan and Iran itself. This dam, which is already causing an annual reduction of 1.6 billion cubic meters of water from the Aras, is hitting the latter three countries’ farming sectors particularly hard (Sondakika, October 10). Likewise, Turkey’s Ilisu Dam on the Tigris River, completed in 2018 and commissioned two years later, is creating environmental problems that threaten Iran, Iraq and Syria. These downstream countries’ share of the river water is declining, riparian agricultural areas are disappearing, and fine dust pollution in the air is becoming more acute (Yeniakit, November 15).

Finally, Tehran is anxious about Turkey’s growing cooperation with the countries of Central Asia and the Caspian Sea littoral. In particular, Erdoğan seeks to expand and develop transit routes to and in conjunction with Azerbaijan, Turkmenistan, Uzbekistan, and further eastward. Iran views this growing Turkish influence with concern, seeing it as an expansion of political and economic control over Iran’s own neighborhood, under a semi-ideological guise of Pan-Turkic solidarity (Astana Times, November 15; see EDM, April 13, November 17). Tehran has in part sought to balance against these developments by reaching out to Moscow (see EDM, February 25).

Those bilateral stresses and economic setbacks and disappointments aside, Iran and Turkey are presently seeking to increase their level of cooperation in multiple areas. Namely, during Turkish Foreign Minister Mevlüt Çavuşoğlu’s visit to Tehran, on November 15, both countries agreed on a roadmap for long-term bilateral cooperation (Mfa.gov.tr, November 15). According to his Iranian counterpart, Hossein Amir-Abdollahian, the two sides, “will start diplomatic negotiations on this issue. We will conclude this during [Turkish President Recept Tayyip Erdoğan’s] visit to Tehran, and a memorandum of understanding will be signed between the two countries. It will be signed with the participation of the President [of Iran, Ebrahim Raisi]” (Sonhaberler, November 15).

The roadmap for long-term cooperation between Iran and Turkey is expected before the end of December. Presumably, security matters will make up a significant portion of the roadmap given the situation in Afghanistan; but other topics of focus will surely include the fight against drug and human trafficking, counter-terrorism efforts, and the continuation of Iran’s energy exports to Turkey. While the two countries can resolve some cross-cutting tensions in the short term, the implementation of the cooperation roadmap will require a larger review of the foreign policy direction of each side—especially Iran’s. Realization of the roadmap, even if a shared set of goals is agreed at the next summit without major quarrels, will surely prove long and difficult.