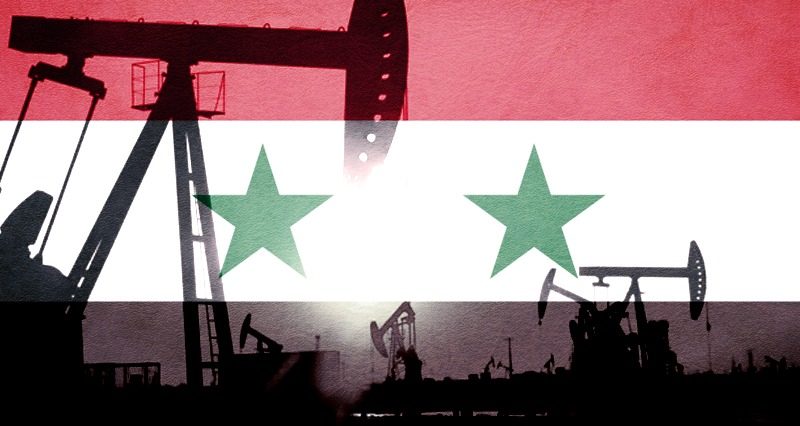 Having oil and gas resources can be one of the most important pillars of the overall economic policy of the ruling economy, which can rightly be a good fit for the country’s economy in the face of current and ongoing crises and for its long-term development and impact. In industrial, manufacturing and overall economic activities of the country, energy and its relation to other activities should be well-managed as it can play a decisive role in determining the future strategic reservoirs of the country’s economy.

The control of energy resources in every part of the world, especially in the Middle Eastern region, has always been the focus of great and regional powers. This has always been the subject of political and sometimes military conflict between countries. Eight years after the Syrian crisis, the impact of the crisis on oil production is becoming more and more evident. Although the root of the crisis cannot be directly attributed to energy sources, what is now clear is that much of the damage to the country’s energy infrastructure has been caused by the Syrian crisis. They will solve the current crisis.

By 2015 and according to the US Energy Information Administration, Syria’s proven oil reserves is two and a half million barrels and its natural gas reserves were 3.7 trillion cubic meters. Syria’s oil production averaged 6,000 barrels a day in the second half of 2018. Syria’s decline in oil production has been exacerbated by the departure of foreign companies operating in the country’s oil fields.

Syria produces about 400.000-500.000 bpd between 2004 to 2011. The country exported about 250,000 barrels of oil per day before the crisis began. This has changed over the years due to increased consumption, and due to crisis by 2012 Syria became an importer of oil and about a year after the Syrian crisis began and the central government lost control of the oil fields. It should be noted that Syria also has shale oil reserves, which the US Energy Information Administration estimates to be around 2 billion tons, citing Syrian government sources. However, the Syrian government’s plan to exploit its shale oil resources considering the current crisis has not yet been operational.

Northeast Syria is an important region because of its rich natural resources, especially fossil fuels in the form of natural gas and oil. In fact, the region holds about 2 percent of Syria’s oil and gas potential – including Al-Omar, the country’s largest oil field. It produced billions of cubic meters of natural gas a year, and was of great economic importance to the Syrian government.

US “securing the oil” is abt denying Syria recovery $.

50 people are talking about this

In addition to Syria’s largest oil field, the United States and its priests in northeastern Syria have also taken control of Conoco, the country’s largest gas company. The company, which can produce about 2 million cubic feet of gas per day, was first built by the US oil and gas giant Conoco Phillips, which ran the company for up to three years.

Most of Syria’s oil and gas resources are in eastern and northeastern Syria, namely Deir Ezzor, Hussein and Raqqa. Syrian gas supplies are estimated at 2 billion cubic meters, mainly in the central parts of the country. With the onset of the war, its oil facilities were also seized by terrorists or insurgents at various times. In year 2012, the facility was seized by ISIS, which sells Syrian oil on the black market illegally. Earlier, armed groups which opposed the Syrian government clashed with each other and as a result, the Syrian oil wells were set on fire. With the defeat of ISIS, US-backed Kurds seized oil facilities in northeast and eastern Syria. 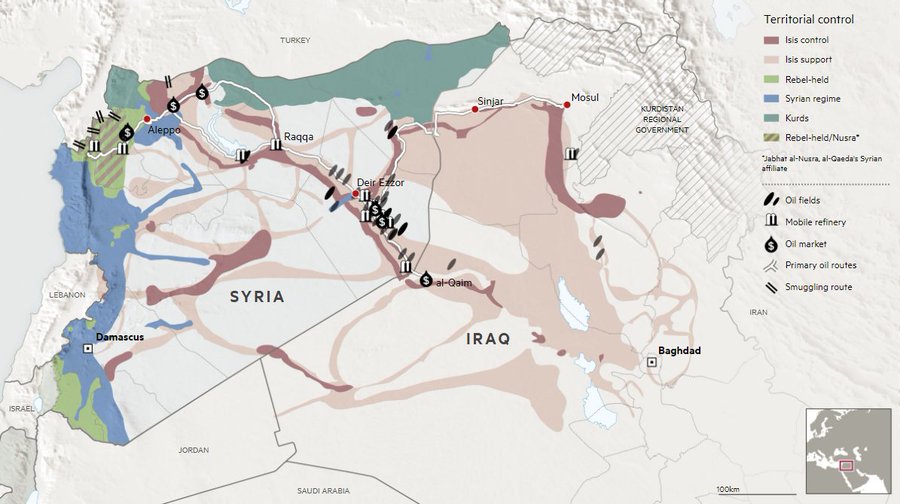 At present, the central government is only in control of its gas facilities, and most of the oil facilities are in the possession of Kurdish groups. Now, eight years after the start of the Syrian war, the country’s oil production has fallen sharply, so this year its oil production was 6,000 barrels a day, meeting only a quarter of its domestic demand. During these years, the Islamic Republic of Iran met the need for fuel by opening a line of credit for the Syrian government, but by the end of the year, the Iranian oil supply to Iran had completely ceased with the start of a new round of US sanctions.

The aim of the #US and #SDF alliance is to take under the total control #Syria’s oil resources for further oil smuggling. US occupation forces have reinforced today the military posts in the area of oil refinery #Conoco

21 people are talking about this

The issue of control over Syria’s oil and gas resources was raised again under Trump’s decree to withdraw US troops from Syria and partially with its active and influential presence in the Syrian crisis, Russia not only equipped its bases in Syria but also managed to gain access to hot water for the first time. The country acquired a right to significant development in the future of the Syrian energy industry in a year. Russia succeeded in acquiring the exclusive right to produce oil and gas, including the right to build infrastructure, provide consulting services in the energy sector, and train oil company personnel. Such a deal is not pleasing to the countries involved in the Syrian crisis.

Syria’s oil and gas fields are among the resources that could be instrumental in rebuilding the country after the crisis and in improving its economy overall. During the Syrian crisis, when the central government was not in control of the oil wells, opposition groups, including the Kurds and ISIS, raised large sums of money by selling oil on the black market. While Syria’s oil and gas production is not enough to be a problem for major energy-exporting countries, the control of energy resources and the target market for Syrian oil and gas production in the future could be of interest to regional and global governments. Therefore, the major powers and regional countries, especially the energy producers, are closely following up on the Syrian oil and gas resources.

In the summer of 2011, shortly after the Syrian crisis began, Iran, Iraq and Syria signed a contract to build a pipeline called the “Islamic pipeline”. With a capacity of approximately 2 billion cubic meters per year, the pipeline was supposed to export Iranian natural gas from the territory of Iraq and Syria to the Mediterranean coast of Lebanon and from there under the sea to Greece and the rest of Europe.

What about Syria, Iran & Russia? They may be the new players on the block & ready to rock & roll with the oil kings. I do believe Russia had draft agreements with their middle east friends to set up a natural gas pipeline to EU so they can control the area & bring EU to its knees

Has Iran started gas expansion in Europe?http://caspianbarrel.org/az/2016/04/has-iran-started-gas-expansion-in-europe/ …
In reality, the war with Syria (Assad) was due to Assad’s rejection of the US-approved Qatar-Saudi Arabia-Syria-Turkey to Europe pipeline to align with the Russia-approved Iran-Iraq-Syria to Europe pipeline. 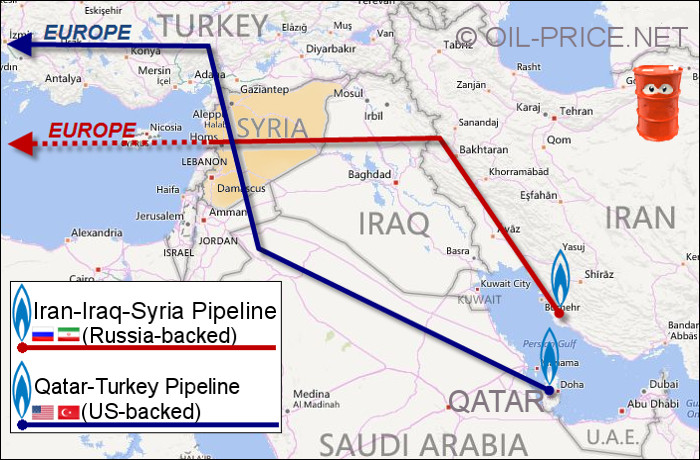 See ALC Not My President & Impeach Trump, Under 1.5 C’s other Tweets

With Iran’s extractable natural gas reserves in the Persian Gulf estimated at over 2 trillion cubic meters, the Iran-Iraq-Syria pipeline will be capable of supplying a significant portion of European countries’ needs for the next 2-to-5 years.

But the pipeline, as the name implies, bypasses Turkey, which was supposed to be the conduit for Iran’s gas transportation to Europe in 2007, but was pushed out of its deal with Iran under US pressure. At the same time, the project, if completed, puts Qatar and Saudi Arabia in a weaker and more difficult position in the future global energy market.

Syria is of strategic importance to Russia. The use of  Syria’s military bases has enabled it to reach the Mediterranean Sea and to influence energy developments in the region. Russia can increase its influence in the Middle East and Africa through Syria. The importance of Syria following Putin’s recent visit to Africa and its comprehensive plan for a greater presence in Africa and investment in African infrastructure is further highlighted. 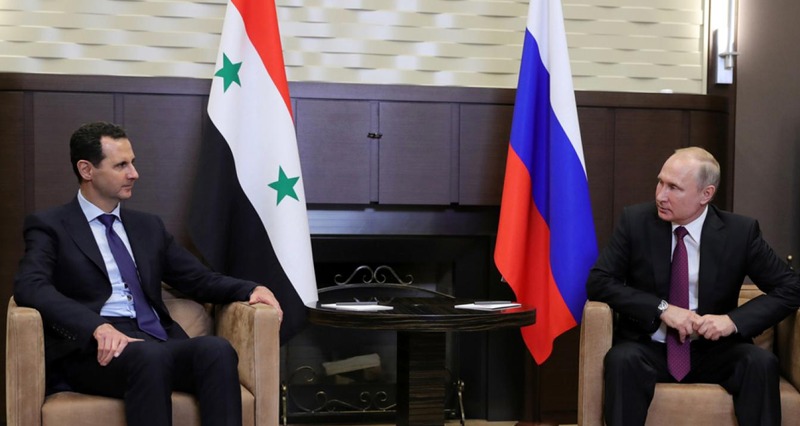 A few of Syria’s major remaining assets are oil and gas fields in eastern Syria, which are controlled by democratic Syrian forces and comprise a significant portion of its energy resources. Signs suggest that both sides prefer negotiations to military confrontation. However, the reason for this tendency to negotiate is different for Damascus and SDF.

Open for business: Syria renting port of Tartus to Russia for 49 years https://on.rt.com/9spw

Moscow and Damascus are set to sign a deal on renting the sea port of Tartus to Russia for trade purposes, deputy prime minister Yury Borisov announced after talks with Syrian President Bashar Assad.

Russia and Syria signed a petroleum agreement on oil extraction and production in December. The development of the Syrian port of Tartus has also been outsourced to a Russian company, but much of Syria’s oil resources are out of Russia’s reach. It is natural that the Russians are demanding that the Syrian oil fields be returned to the Kurds and that they have submitted plans to Damascus. Although details of these plans have not been released, Moscow is likely to call for a military strike by the Syrian central government on the Kurdish position if negotiations fail. Some prominent Russian media articles and statements by Russian officials can be seen as a sign of this tendency.

More importantly, given the current situation, Iran will not have easy conditions to play a role in Syria’s political and economic developments, particularly in terms of  its presence in the post-crisis energy sector. Russia and China in the near future appear to be able to make a greater contribution to Syria’s energy and infrastructure sector. Iran, as well as Turkey, seem to be working hard to gain a greater share in rebuilding Syria, and especially its energy infrastructure, by spending a great deal on the Syrian crisis.