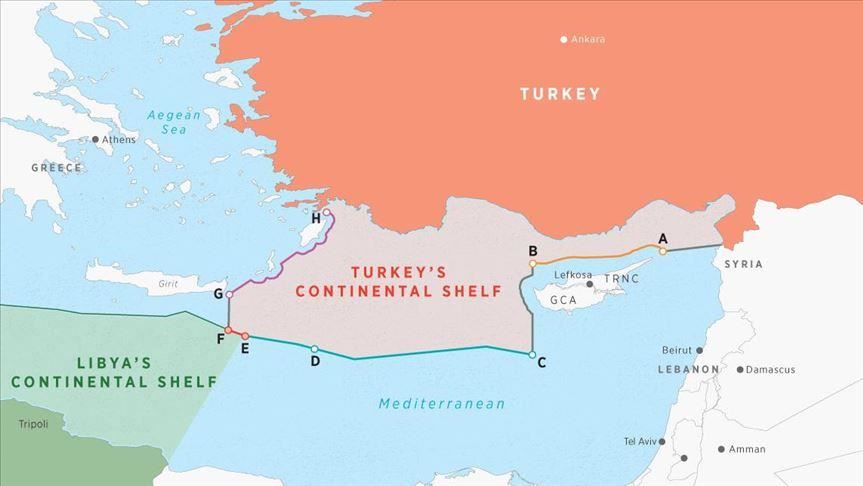 The Geopolitics of the Turkey-Libya Maritime Deal

Discovering new sources of energy always creates the opportunity to increase regional cooperation and increase stability and security in a given region. However, at the same time, these resources can also increase tensions. In recent years, maritime resources have been the focus of both coastal states and trans-regional powers. Numerous meetings have been held with the leaders of the countries involved in order to discuss the future of Mediterranean resources. Due to tensions between Turkey and some of the countries in the region, Turkey has not attended some of these meetings– its absence has reduced its presence and impact on regional equations.

After the fall of Gaddafi, Libya was divided into two divisions dominated by parallel governments in the east and west. Pro-military militias dominate the east of the country, and the national unity government, headed by Fayez al- Sarraj, controls western Libyan affairs. During this period, the country has witnessed increased tensions and armed struggle between armed groups to gain control of Tripoli.

In late November, Turkey made a deal with the Libyan National Unity Government to stay out of the region’s energy equilibrium. Following the signing of the agreement, the Turkish Foreign Ministry issued a statement announcing the signing of an agreement between Turkey and Libya to set part of Turkey’s maritime borders east of the Mediterranean. According to the Turkish Foreign Ministry spokesman Hami Aksu, “the deal is in accordance with the principles and principles of international law, the UN maritime law and the legal requirements of international courts.”

In fact, two important agreements were signed between Turkey and the Libyan National Accord Government. The first regarded Turkish and Libyan maritime privacy in the Mediterranean, and the second covered the development of security and military cooperation between the two parties. The second contract outlines the conditions for Turkish military support to Libya.

Signing a contract with the government of national consensus was naturally not welcomed by General Haftar. Immediately after opposing the signing of the agreements, he ordered an attack on Tripoli, the capital of the Libyan National Unity Government. It should be noted that Turkey’s rivals in the region and the Middle East, Egypt, Saudi Arabia and the United Arab Emirates, support General Hagar, while Turkey and Qatar support the Libyan National Unity Government and Fayez al- Sarraj.

Egypt and Greece immediately protested the signing of the agreement, as did Israel. Greece sent a delegation to Benghazi to meet Turkey’s General Anatolian government. The Greek action was met with official reaction from the Libyan State Ministry of Foreign Affairs and National Unity. On the ministry’s official account, Foreign Minister Mohamed Taher Siala stated that “the meeting violates the decisions of international institutions that regard the national unity government as the only legitimate Libyan state.”

Greece also expelled the Libyan ambassador from Athens in light of the Mediterranean dispute and protested the maritime agreement. France and the government of South Cyprus held military exercises in the eastern Mediterranean region.  Both categories are deeply intertwined– interestingly, Turkish Prime Minister Recep Tayyip Erdogan has been reluctant to militarize maritime disputes in order to exploit Mediterranean energy resources.

The European Union, which is carefully monitoring the events in the region, has always supported Greece and Cyprus’ position on Mediterranean resources. The European Union sent the Italian foreign minister to Libya to announce the EU’s stance on recent conflicts in the country as well as its contract with Libya to the parties involved. The US Department of State’s statement on December 3 warned that the agreements could seriously increase tensions.

Meanwhile, Turkey is trying to provide conditions for the implementation of the deal as soon as possible. Erdogan has announced his readiness to deploy military forces in Libya to resolve the military disputes. The Turkish parliament approved the Maritime and Security Deal between Turkey and the Libyan National Government on December 5. With the approval of the Turkish Parliament, the deal became formal and international.

Turkish media reported that Turkey’s “Eastern Mediterranean Invitation Exercise,”  held every two years with the Turkish Navy organization, began with the movement of warships stationed at the Aksaz Naval Base. Aimed at developing mutual cooperation between the United States and training the Turkish naval bases for a high level of preparedness in line with NATO regulations, the second day of the exercise began with the practice of leaving port in times of emergency navigation. The Turkish Navy Command has established an exercise-control unit of 170 people while an additional 96 personnel will perform their duties at the headquarters, Yankı Bağcıoğlu, the head of navy operations, told state run Anadolu Agency.

The Turkish Navy’s largest ever exercise was recently conducted simultaneously in the eastern Mediterranean, the Aegean and the Black Sea. As part of its annual training program, the Turkish Army conducted Sea Wolf 2019 over the course of several days in partnership with the Navy and War Command.

On January 8, Russian President Vladimir Putin will pay an official visit to Turkey. The focus of the talks between Putin and Erdogan will be the opening of the TurkStream Project, raising the level of cooperation between the two countries and the Syrian and Libyan crises. Turkey is one of the largest purchasers of Russian natural gas, and, with the opening of the TurkStream Project, it will be importing about 15.5 billion cubic meters of gas annually from Russia, while another 15.5 billion cubic meters will go through Europe. The Libyan internal crisis and Russia’s influence in the country have prompted Turkey to ask Putin to use its influence to help resolve the Libyan crisis. News from Moscow indicates that Turkey and Russia are negotiating a joint formula that would serve Turkey’s interests in Libya: so far, Russia has not openly opposed Turkey’s agreement with the Libyan National Unity Government.

In late December, Erdogan headed to Tunisia to meet with the country’s leaders, hoping to increase the countries bilateral cooperation. Erdogan hopes that bettering Tunisia’s relations with Turkish authorities will strengthen Turkey’s position in the Mediterranean and help resolve the Libyan internal crisis. Talks will also be held on the sale of Turkish drones to Tunisia.

The Mediterranean will very likely be a geopolitical hotspot throughout January. On January 2, the construction of the Eastern Mediterranean pipeline will begin, promising to eventually deliver natural gas to the Balkans and Central Europe. A meeting between France, Greece, Cyprus and Egypt will be held on the energy resources of the Mediterranean between January 4-5. On January 7, a plan will likely be approved to send Turkish troops to Libya. Putin will meet Erdogan on January 6 and General Haftar will visit Rome sometime early in the month as well.

It is not clear how and how many Turkish troops will be sent to Libya, but if Turkish military forces are dispatched to Libya and Russia uses its influence in Libya to enforce Turkey’s recent deal with the Libyan National Unity Government, Turkey will have a stronger position in relation to Mediterranean energy resources. Considering these recent developments, Turkey needs to sign similar agreements with other Mediterranean coastal states to play a more active role in long-term maritime energy equations by maintaining its interests.

This possibility has become even more likely following the Turkish president’s announcement that he would be sending troops to Libya upon the request of the National Unity government. However, the situation should not be viewed solely from Riyadh’s perspective, as Egypt and the UAE also support Haftar’s caliphate.