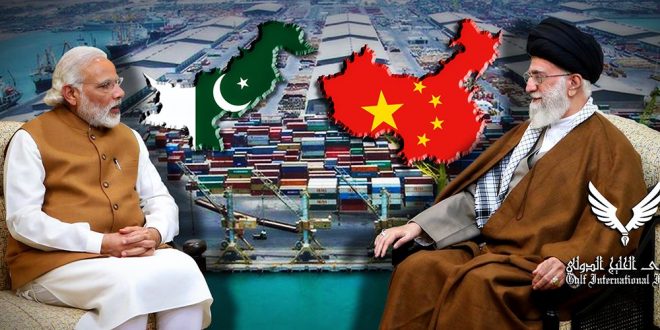 Chabahar port could become a significant commercial outlet serving these countries, and it could also prove quite lucrative for Iran, which has struggled to raise funds in the wake of oil and gas sanctions.

Iran’s strategic, geopolitical, and geoeconomic position has been carefully scrutinized by major countries around the world. The convenient location of railways and roads, and Iran’s access to the coasts of the Persian Gulf, Sea of Oman, and Caspian Sea coast has been a topic of recurring interest to the world’s major economic producers. In particular, Iran’s Chabahar port, located in southeastern Iran, enables India to continue its participation in a global competition against China, which wants to maintain its presence and power in the Arabian Sea. The trilateral interactions between the United States, China, and India represent one of the most important power relationships in contemporary Asian geopolitics. This tripartite influence includes two simultaneous security rivalries, one between China and India and the other between the United States and China.

Commercial Ties With Iran a Key Objective for India

Consequentially for this relationship, India recently signed an agreement with Iran and Afghanistan which allowed it to connect to Afghanistan and Central Asia via Chabahar. Analysts believe that India, as one of the largest emerging economic powers in South Asia, is trying to infiltrate Central Asian economies by investing in Chabahar, with the long-term strategy of developing domestic markets, accessing the markets of Afghanistan and Central Asia in competition with China and Pakistan, increasing its economic and political presence in the region, and providing an alternative to the port of Gwadar, a major transit route between China and Pakistan. Consequently, Chabahar is of paramount strategic importance to India.

Dr. Subrahmanyam Jaishankar, India’s Minister of External Affairs, underlined that the Chabahar port would be regarded as a linchpin in the north-south corridor, saying that with this move, Central Asian countries would have safe, accessible and unimpeded access to the sea. He continued: “We welcome the India-Iran-Afghanistan-Uzbekistan Quartet Working Group on the joint use of the Chabahar port.”

Some Iranian experts believe that the views of the great powers on Chabahar, including those of China and India, are strategic. However, Iran’s economy-related perspective means that Iran cannot cooperate with China and India in Chabahar at the same time, at least not initially. China, due to its ongoing disputes with both India and the United States, does not want a trio of India, the U.S., and a third country in the region to be formed in the region, which could represent a major political threat to the expansion of its Belt and Road Initiative (BRI).

India and China, the two main powers in South Asia, are trying to outdo each other in competition with rapid changes in geoeconomic developments. The emerging north-south corridor is competing with the China-supported Belt and Road initiative. India seeks to build new alliances and geopolitical policies by bypassing Pakistan through the development of the ambitious North-South International Transport Corridor, with significant trade and energy dimensions and the convergence of strategic interests between India, Russia and Central Asia. The 170-kilometer ports of Gwadar and Chabahar will play key respective roles for New Delhi and Beijing. As India has a positive relationship with Iran and the United States, it can play a significant role in having them approach each other to strengthen peace and negotiate a new, more comprehensive agreement.  On the other hand, there is a cordial relationship between India and Iran, deriving from both India’s infrastructure project and its significance as one of the biggest markets for Iranian exports of oil and other products.  Thus, if India intends to restrict China’s increasing impact within Iran and restrain Iran’s increasing reliance on China, it needs to reconsider its relationship with Iran as an immediate strategic priority. If India can push Iran towards accepting negotiations, and play a significant role in facilitating a nuclear agreement with the United States, it can become a prime partner and gain advantage over China. Since the last few months, global and regional players have been taking both active and counteractive steps in the Indo-Pacific and West Asian geo-political regions.  Among these players, India has been taking steps to pursue its own interests. All these strategic moves have been occurring while the powerful but disturbed U.S. was in confrontation with a restless China.

The economic and commercial advances of China in the last 30 years have enabled it to strengthen its position in the Indo-Pacific area, which has in turn provided Beijing with the economic means to enhance the economy of regional areas. China has consistently displayed a disapproval towards the principles that support the current world order. India, however, has been worried about the deal because of the 25-year trade deal between Iran and China. During the visit of Indian Prime Minister Narendra Modi to Iran in 2016, Iran, India and Afghanistan signed a tripartite agreement, outlining the “International Transport Corridor” with an eye toward facilitating the transfer of goods from India to Afghanistan via Chabahar.

Establishing a secure trade route from the landlocked countries of the region to the countries of Central Asia and Western Europe is one of the pillars of this agreement. Modi noted at the time that with the cooperation of Iran and India, Chabahar would become the connecting highway of the surrounding countries to the east and west of the Caspian Sea through the north-south corridor. Chabahar port could become a significant commercial outlet serving these countries, and it could also prove quite lucrative for Iran, which has struggled to raise funds in the wake of oil and gas sanctions. Stating that the change to the paradigm of transnational development is an indicator on which the future of the world will be formed, Bahman Eshghi added that the Chabahar port would have the capacity to be a connection point for key players in the region and with their participation and cooperation.

China’s presence in Gwadar Port in Pakistan and therefore the Indian Ocean narrows the field for India, and it is certain that if India fails to connect with Afghanistan, Central Asia and Russia, it will effectively cede commercial dominance to China. According to many world development analyses, in 2050 India will be the second largest economic power in the world after China, as India’s path to economic development and growth has been steadily increasing in recent years. In the current situation, India needs oil from other sources, but for Iran, its route to India is irreplaceable.

The recent Iran-China agreement has been denounced by the United States, and it is sure to expand competition between the United States and China in various other parts of the world. More importantly, the agreement may be a tangible consequence of India’s success, which ousted China militarily in Kashmir in June. New Delhi perceives the Iran-China agreement as a step towards ending India’s use of the Chabahar port and building a commercial connection with Afghanistan. For Beijing, though, India’s move to Kashmir means cutting off the China-Pakistan land belt, which in turn gives India its own land belt to Central Asia. Thus, after China leaned on Tehran, the Iranian authorities canceled the Chabahar-Zahedan project, of which 628 km had been completed on the Indian side.

What Should Iran Do?

The foreign policy of the Raisi administration will play an important role in the future of Iran’s projects at the regional level. The future of Indian investment in the port of Chabahar is likely to depend on resolving the existing problems between Iran and the United States. In a marked contrast with previous administrations, Biden has declared his top foreign policy priority to be China, meaning that a broader agreement between the U.S. and Iran is a desirable outcome for the White House. At the same time, increasing U.S.-Indian cooperation in all areas could reduce China’s role and influence in the region.

Given the current situation of Iran regarding Indian investment in the port of Chabahar, India has called for an international ruling in the Chabahar agreement. This outcome is not favorable for Iran. Tehran must provide the conditions for India to invest in Chabahar. After a possible agreement and the lifting of sanctions, Iran can export oil to India and take advantage of the financial resources and technology of Indian companies. Undoubtedly, one of the key economic problems to be solved by the lifting of U.S. sanctions against Iran is the development of the Makran coast, especially the port of Shahid Beheshti. Because the need for countries, such as India, Russia, China, Afghanistan and Central Asian countries for this strategic ocean port could foster an increased push for good political and commercial relations with Iran, even while Tehran’s economic activity continues to be crippled under sanctions. It should not be forgotten that India called for an international ruling on the Chabahar agreement; a ruling against Iran would make it harder for other countries to invest in Iran’s transit projects.