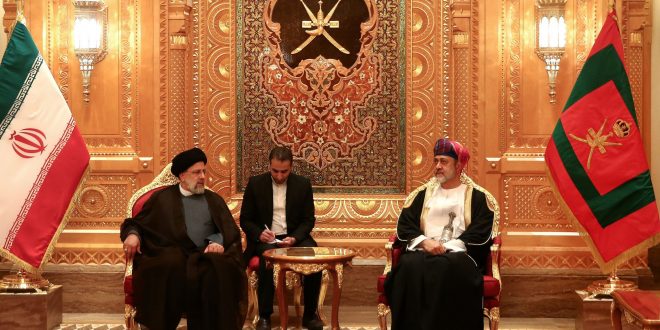 Without the lifting of sanctions and a fundamental change in Iran’s foreign policy, it won’t be easy to resolve tensions in the region and increase the level of political and economic relations with neighbors.

Regionalism and the development of Iran’s relations with Russia and China are among the presidency’s priorities in foreign policy. In recent months, Ebrahim Raisi has visited Russia, Qatar, and Oman. It should be noted that Iran used both banks and ports in Oman to circumvent the sanctions. Oman has also been involved in the signing of the nuclear deal and is still trying to maintain its disappearing role in reviving the IAEA Board. An important goal and approach that has been emphasized since the inauguration of the Ministry of Oil of the 13th government is the development of energy diplomacy. Following the energy agreements reached between Iran and Turkmenistan (gas swap), Russia, Qatar, and Latin America, it is now the turn of the fifth station, Oman.

The first agreement on the construction of the Iran-Oman pipeline was signed in 2004 and until 2008, for 25 years, 10 billion cubic meters of Iranian gas were to be transported annually through a 200-kilometer pipeline. The project was suspended following the escalation of tensions between Iran and the West over its nuclear program with the inauguration of Mahmoud Ahmadinejad’s government and has repeatedly come to the negotiating table between the two countries. The last round of the agreement to revive this project was done in 2016, before the withdrawal of the United States from the JCPOA, but again, the imposition of new US sanctions was postponed. Oman has an annual production of 37 billion cubic meters of gas, of which approximately 27 billion cubic meters are consumed domestically, and the rest is converted to liquefied natural gas and exported to world markets. Statistics from BP, which has developed most of Oman’s gas projects, including the Khazan field, show that Oman’s gas production has risen from about 26 billion cubic meters to 37 billion cubic meters over the past decade; that is, it has grown by an average of 4.4 percent annually.

Oman’s energy minister announced after the Iranian president’s visit to Oman that Oman and Iran had signed agreements to develop two gas pipelines and an oil field along their common sea border. One of these pipelines will connect Iran to Oman, and the other will be connected to the Hengam oil and gas field. The field’s reserves are estimated at about 1,800 billion cubic feet and its oil reserves are estimated at more than 400 million barrels. The Hengam oil and gas field development project, which is a joint venture between Iran and Oman, has been one of the remaining agendas for the development of relations between the two neighboring countries for more than two decades. Despite the high potential of the two countries, the volume of trade has not yet increased as expected. The volume of imports to Oman totals $24 billion, of which Iran’s share was about 1.8 percent ($438 million last year). On the other hand, the share of imports to Iran was about two billion dollars, and this volume of goods was imported to Iran directly or through neighboring countries. Oman’s share of these imports was 1.2 percent ($434 million). But in the first seven months of this year, Iran’s exports to Oman grew by about 75 percent compared to the seven months last year. Imports from Oman have also grown by 24 percent, and the total volume of trade between Iran and Oman has grown by about 45 percent. Under these circumstances, it can be hoped that the volume of trade between Iran and Oman will reach over one billion dollars.

The Ministry of Energy and Mines of Oman issued a statement on its official Twitter page denying the words of the Minister of Energy and Mines, “Mohammad bin Hamad Al-Ramhi“. It stated that there was no agreement with Iran on sharing the two sides’ share of the joint “Hengam” gas field. According to the statement, the oil field is located on the seabed between Oman and the Islamic Republic of Iran and overlooks Musandam province in Oman. The Iranian part of this oil field is “Hengam” and the Omani part is “Gharb Bukha”. Oman has been extracting from this oil field since 1985. The Oman Ministry of Energy and Mines added, “Consultations and talks have been going on for a long time regarding [the joint development of the oil field and the distribution of each country’s share], but no agreement has been reached yet.” The statement further stressed that the Oman Ministry of Energy and Mines has not recently attended any technical meetings or trade talks on the oil field, and therefore, any agreement on the distribution of shares among the partners is denied.

On the other hand, to shorten the pipeline route and avoid entering the waters up to a depth of one kilometer, the UAE needs to be allowed to build pipelines in the waters of this country, which is an issue that the UAE has previously rejected. Oman itself has been developing the huge Khazan gas field for years with the help of BP. It is expected that in the coming and medium years, there will be no urgent need to import gas from Iran – An issue that also reduces the country’s incentive to build a gas pipeline. Another challenge is that Iran itself faces a daily gas deficit of 250 million cubic meters in winter, which is more than three times the total Oman gas consumption. Such a volume of gas deficit in winter makes Iran a reliable partner for gas exports to Oman only in the warm seasons of the year. From next year, the South Pars field, which supplies 70 percent of Iran’s gas, will enter the second half of its life, and its production will be reduced by 10 billion cubic meters every year. Another point is that Iran itself is facing a growth in gas consumption. Last year, Iran’s domestic gas consumption increased by six billion cubic meters and reached 238 billion cubic meters. Iran had only 17 billion cubic meters of additional gas to export to Iraq and Turkey, using highly polluting alternative fuels such as fuel oil and diesel in power plants and industry. Thus, the challenges facing the Iran-Oman gas pipeline project are very significant and complex, and it does not appear that a contract will be signed to lift US sanctions.

Without the lifting of sanctions and without a fundamental change in Iran’s foreign policy, it will not be easy to resolve tensions in the region and increase the level of political and economic relations with its neighbors. Iran and Oman, with five decades of good relations, can increase trade, but this also requires the lifting of sanctions. The Hengam joint gas field can increase cooperation between the two countries in the energy sector. In view of the above, if Iran wants to use Oman’s nuclear facilities to start exporting minerals, it must provide the conditions for signing a nuclear agreement as soon as possible; this is because only with a nuclear deal and the lifting of sanctions can it increase its natural gas production capacity and increase the level of regional cooperation by implementing some natural gas transmission projects to neighboring countries. Countries prevent tensions in the region by exporting energy and creating interdependence. Oman does not need to import Iranian natural gas, but to become an exporter of energy in the short term, Iran needs to implement the gas pipeline project to Oman, and all this requires a fundamental change in the foreign policy and energy diplomacy of the Islamic Republic of Iran.