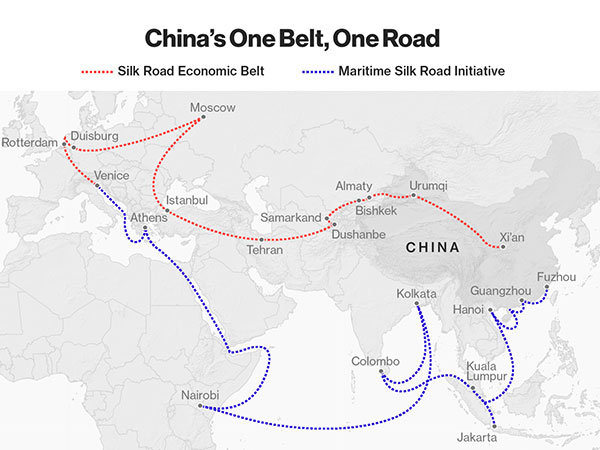 Iran’s Interests in China’s One Belt One Road Project

The Chinese economy has recently boosted its foreign exchange earnings and substantially increased its currency reserves. The increase in China’s foreign exchange reserves and resources has provided the government with the opportunity to become one of the major actors in the supply of international relations and the global economy.

China is one of the emerging geopolitical actors who have presented a plan for a revival of the Silk Road as a strategy to achieve global power. The so-called One Belt One Road policy is one of the main initiatives of China’s foreign policy to expand its sphere of influence to other regions. The plan, which includes approximately 4.4 billion people (65 percent) of the world’s population and $21 trillion of its gross national product, was announced by President Xi Jinping in September 2013 and includes two sections of the economic belt: the “New Silk Road” and “Maritime Silk Road”.

The northern part of the project connects China to Central Asia (Kazakhstan, Kyrgyzstan, Tajikistan, Afghanistan, Turkmenistan and Uzbekistan), Russia and Europe. The southern route will begin in China and end in Southeast Asia, South Asia, Pakistan and the Indian Ocean. The central route extends from Central Asia to Iran and the Persian Gulf, as well as Turkey and the Mediterranean Sea. A total of 65 countries will build new roads, ports and airports on the Silk Road’s modern route. As a result, a large-scale business network will be established among these countries.

The need to supply energy and cheap raw materials made it possible for secure and short-term routes to invite China to invest in some infrastructure projects from countries that import energy and raw materials and increase its military presence in some parts of the world. China needs infrastructure to make its products at a reasonable cost and have them spend less time on the market. China’s investment in countries where it imports oil and gas is one of the main pillars of its national energy security policy.

With its massive oil and gas resources and its presence in the Hartland Energy project, Iran is in an excellent geographical location to take advantage of China’s Silk Road project’s benefits. The geostrategic position of Iran, which is located on the Caspian Sea and the Persian Gulf border, is important for China, which is part of why it has encouraged Iran’s serious engagement in the project.

If the conditions for investment and the presence of foreign companies to complete Iran’s industrial, oil, gas and energy projects are not provided, Iran will miss an important opportunity, and Iran’s rivals and neighbors will be able to take advantage of it to increase political influence in the region, and gain substantial economic benefits in the meantime. The best route to reach the market in Central Asian and the Caucasus is via Iran and its Transport infrastructure, which provide them with all the conditions necessary to take advantage of the policy.

Since 2016, authorities in Iran have expressed willingness to embrace China’s Belt and Road project. Referring to Iran’s capabilities, the two sides signed documents on Iran’s participation in the project, and the two countries set up measures to cooperate in various fields, such as railways, ports, energy, industry and services.

China was Iran’s largest trading partner in 2018, trade between the two countries reached about $35 billion. China is also the largest importer of Iranian oil. The two countries plan to reach trade agreements worth $600 billion over the next decade. China has allocated two credit facilities for $4.2 billion, which is intended to finance high-speed rail lines and connecting major cities in Iran, including Tehran, Mashhad and Isfahan.

The Mashhad-Tehran train will be an important step in completing the new China Silk Road project, and will offer Iran major economic advantages. China’s $40 billion investment in the Silk Road Investment Fund and the request from other countries to join the fund signify the importance of restoring the Silk Road in the Chinese perspective.

The first-ever train traveling the long route from China to Iran set off from Yiwu City in China’s Zhejiang Province on January 31, 2016. It covered 10,399 km, passing through Kazakhstan and Turkmenistan, and reached the border station of Injeborun after 14 days. The opening of this railroad is an important step in the Belt and Road project. The opening of this rail line strongly increased the volume of trade between the two countries. The strengthening of Iran’s position in the Asian Infrastructure Investment Bank could also be effective in helping Iran implement other projects, helping it accumulate financial resources to build the infrastructure.

Due to US sanctions and with the withdrawal of European companies from some of Iran’s railway projects, the projects are being halved, and Chinese companies and Chinese financial institutions will now participate in completing them. If Iran fails to provide the necessary capital and technology to complete such projects, it is unlikely that China’s Silk Road will benefit from the benefits and facilities in the short to medium term. The delay in completing the infrastructure could have a negative impact on Iran’s position in regional developments and projects such as the North-South Corridor project. The regional tension policy will enable Iran to play an important role in regional security and use its geo-strategic position in international transit projects.

The new Silk Road Economic Belt Foundation has the potential to improve security in the region. The key to achieving this security is convergence, and the Silk Road Economic Belt is a necessity for accomplishing this task. The infrastructure that links East Asia to Central Asia, Central Asia to West Asia and West Asia to Europe also translates into transnational coexistence with Europe. Since there is pushback from some countries, such as the concerns expressed by Russia and India about China’s ambitions in the region, as well as the huge costs. Despite its practicality, these elements ensure China’s plan will face future challenges.

There is 30 to 40 percent available capacity in Iran’s transformation and packaging industries, which could be at the disposal of China along the Silk Road. Some analysts even refer to Iran as the new Silk Road’s Energy Hub. From this point of view, Iran can play an important role in the economic development of the region, the world and the improvement of relations between countries.

China’s Belt and Road initiative, both on-land and offshore, can enhance Iran’s geo-strategic, economic, and security interests in the region, due to the country’s core role in the project. Iran’s effort to be more inclusive is crucial, and can play a central role in the construction, commissioning and continuation of the new Silk Road. Iran can improve its trade capacity on the Silk Road, including its large-scale and small industries, as well as handicrafts, fuel supply and food supply. Timely economic diplomacy regarding the opportunities of this plan will be crucial in deciding the future of the countries included in the policy.