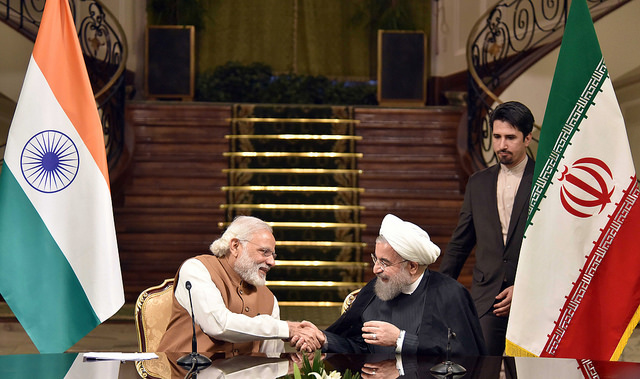 Since it has huge oil and gas reserves and is geographically quite close, Iran is ideally placed to provide energy to India, and thus the country is Iran’s second largest oil market after China. Even at the height of the U.S. sanctions on Iran’s energy sector, India continued to import oil from the country. The relationship between Iran and India has expanded rapidly in recent years. After the 2015 nuclear deal, with the lifting of sanctions in various fields, especially energy, economic and commercial links between Iran and India expanded dramatically.

With new sanctions on the horizon, Iran provided significant discounts to Indian importers last summer. Thus, the volume of August imports was 56 percent higher than the previous August. So far, India is one of the countries exempted from secondary sanctions that the Trump administration is imposing on states doing business with Iran. But oil prices are expected to rise nevertheless, which will adversely affect India as the third largest oil importer in the world.

Although sanctions on banking prevented New Delhi from transferring money from the sale of oil to Iran in time, links were preserved thanks to strategies established during the previous round of sanctions. At that time, 55 percent of the proceeds from the sale of Iranian oil to India were deposited in euros and 45 percent in rupee in UCO Bank, an Indian financial institution, after which most of the money was transferred to Iran. This time around, UCO Bank is reluctant to serve as the conduit for funds, and India has opted to pay Iran in rupees through the Mumbai branch of an Iranian bank.

India has launched a major effort to invest in petrochemicals, chemical fertilizer, and the other upstream industries of its own oil industry. The country’s Oil and Gas Minister Dharmendra Pradhan has announced plans to invest $20 billion in Iranian oil and gas infrastructure. Iran, aiming to gain a competitive edge over other suppliers, has delivered oil at reduced prices to India, offered a longer period of credit to pay for oil purchases, and is transporting the oil almost for free. In addition, many Indian refineries are equipped to match Iranian refineries, so they cannot easily rely on other suppliers. Iran has also offered to cover the insurance for tankers that carry Iranian oil to India in lieu of an exemption from international financial institutions.

The port of Chabahar is the best, the closest, and the least costly route for Iran to reach global markets and promote the development of neighboring countries. India has committed to invest $500 million to develop Chabahar port. Iran and Afghanistan, meanwhile, want to establish an international freight corridor through this port, and several Indian wheat shipments have already gone to Afghanistan through Chabahar. New sanctions against Iran, however, threaten the success of the Chabahar project by not only preventing countries and companies from trading with Iran but also by threatening sanctions on financial institutions that engage with Iran. These sanctions will reduce the flow of capital and business to the port.

On November 7, the United States announced that it would waive sanctions on certain parts of the Chabahar port, along with the Chabahar-Afghanistan railway project and Iranian petroleum exports to Afghanistan. Since Islamabad is not allowing India to use Pakistani territory for direct business with Afghanistan, Chabahar is important for Indian access not only to Iran but to Afghanistan and beyond. The diversification of energy resources is a key pillar of Indian energy policy. If sanctions continue to punish the Iranian energy sector after the U.S. waivers expire, India will reduce oil imports from Iran and increase imports from Iraq and Saudi Arabia.

Indian oil imports from Iran were expected to grow by 31 percent year-on-year, reaching 500,000 barrels per day in the fiscal year beginning April 1, 2018. Iran understands India’s problems in dealing with an unpredictable energy market and will do everything it can to ensure the security of India’s energy supply. India’s relations with Iran are also complicated by the impasse over Indian investment into developing Iran’s Farzad B gas field.

China has been one of the strongest drivers of closer relations between Iran and India. An economic corridor between China and Pakistan and the former’s investments into the port of Gwadar is a common geopolitical challenge for both India and Iran. The economic corridor is designed to limit Indian operations in the western regions of the Indian Ocean and the Oman Sea. An expanded Gwadar port, meanwhile, undermines the potential of the Chabahar port and allows Pakistan to challenge its regional rival, India, in the area of Afghanistan.