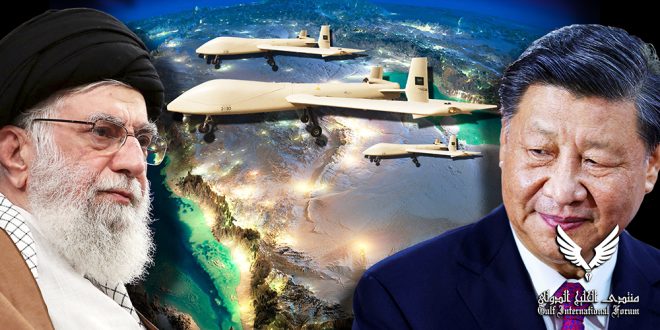 Driven by its desire for economic gain and the threat posed by Iran, Saudi Arabia has relied heavily on China to develop its domestic drone program—much to Washington’s chagrin.

In recent years, many Middle Eastern states have devoted growing sums to research in cutting-edge defense technology—particularly drone warfare, a crucial component of modern military conflict. Saudi Arabia, the world’s largest oil exporter, has faced repeated drone and missile attacks from the Houthi rebels in northern Yemen in recent years, seriously damaging its supply security and energy infrastructure. The continuation of these attacks has prompted Riyadh to make investments of its own in the drone industry. Last March, as part of its efforts to localize its military industry and realize economic boon, Saudi Arabia signed an agreement with China to build military drones inside the Kingdom, maximizing their contribution to the national economy.

A vital consideration when examining the 2019 Houthi drone attack against Saudi Arabia is that Tehran almost certainly approved the strike. It is also likely that Iran provided the intelligence and technology to carry it out. Today, Iran is feeling the pressure of U.S.-imposed sanctions and appears to be lashing out at regional competitors’ oil sectors to raise energy prices and remind its regional rivals that as long as its own oil exports suffer, those of its neighbors are vulnerable. Unmanned aerial vehicle (UAV) and missile attacks on the energy infrastructure of Saudi Arabia’s Boyza region demonstrated just how susceptible the Gulf monarchies are to these weapons systems and underlined the need for more advanced missile defense systems.

Saudi Arabia’s Vision 2030 has largely driven the nation’s interest in developing its drone industry. As the project focuses heavily on technology to bring about economic expansion and diversification, it is logical for Riyadh to prioritize the development of systems that will protect the kingdom from strategic threats throughout the region. The Saudi government ultimately aims to become a competitor to the UAE in terms of drones and technology. In particular, the Saudi Center for the Fourth Industrial Revolution (C4IR) is developing plans for a heavy-lift drone. According to Walid Abu Khaled, CEO of the Saudi Military Industries Company, the country is working to produce its own drone models. Abu Khaled added that the Kingdom hopes to divert half of its total military spending to domestic production, including drone manufacturing, by 2030.

Indeed, in March 2022, the military authorities of Saudi Arabia announced that the country would implement a ten-year military localization program that would see the Kingdom almost immediately begin domestic drone production. According to the Saudi authorities, the localization project of drones are advanced with the coordination of the General Directorate of Military Industries of Saudi Arabia and the participation of the Saudi defense technology corporation. The “ASEF” drone is the first example of Saudi Arabia’s unmanned aircraft, which was unveiled by the General Directorate of Military Industries in 2019 at the Dubai International Aviation Exhibition. The Saudi General Directorate of Military Industries announced that it had signed a contract to build a UAV called Hares Al-Ajwa [Sky Guard]. All of these efforts further Saudi Arabia’s goals of localizing the production of unmanned aircraft systems and establishing itself as a driver of technological innovation in this space.

In 2017, China’s Xinhua news agency announced the country’s biggest arms export deal; Beijing would supply 300 Wing Loong II drones to Saudi Arabia via the Chengdu Aircraft Industry Group. The Saudi Air Force unveiled the drones for the first time at King Khaled air base, in the city of Khamis Mushit. The Wing Loong II is 36 feet (11 meters) long and 13.5 feet (4.1 meters) tall, has two wings with a span of 67 foot (20.5 meters), and can carry 1060 pounds (480 kg) of cargo and various weapons at high altitudes. The Chinese drone can carry out long-distance combat missions relying on satellite communication. It is used to conduct surveillance and precision air strike. It is important to recognize that the drones used by Saudi Arabia before purchasing the Wing Loong II were less efficient. The enhanced capabilities of the Wing Loong II platform will enable Riyadh to better protect its energy infrastructure.

The Chinese have emerged as the primary beneficiaries of the fraying relationship between Saudi Arabia and the United States. “Rarely has the chain of broken expectations and perceived insults and humiliations [between Saudi Arabia and the United States] been greater than they are now; there’s almost no trust and no mutual respect,” said Aaron David Miller of the Carnegie Endowment for International Peace. The purchase of advanced drones and missile defense systems from China will address Riyadh’s energy infrastructure security concerns. It will also have the byproduct of decreasing the Kingdom’s reliance on Washington for defense. Observers expect Saudi Arabia to become a major drone power in the region. Chinese president Xi Jinping’s visit to Riyadh will be an important step in strengthening Saudi-Chinese military ties and could cement Beijing’s influence in one of the Gulf’s most powerful states.

As things stand, it appears that Saudi Arabia and China are willing to deepen ties across several sectors. The immense financial resources and technological prowess of Chinese companies can be leveraged to develop the military sector of Saudi Arabia. But bilateral cooperation goes beyond improving Saudi Arabia’s security; the two states have also agreed to help establish Saudi Arabia’s NEOM “smart city” in the northwestern Tabuk region.

To address the consequences of increasing Saudi-Chinese alignment, Washington should review its foreign policy towards Saudi Arabia and the Middle East as a whole. Considering the objectives of Riyadh and Beijing, the United States should expect China’s presence in Saudi Arabia and the Gulf more generally to increase in the coming years. Of course, there are certain aspects of the Sino-Saudi relationship that the United States cannot change. For instance, regardless of U.S. policy, Saudi Arabia will almost certainly continue providing China with a steady supply of oil, and Beijing will likely continue to provide technical and financial backing for Saudi projects.

There is no doubt that the diplomatic rifts that have rocked the U.S.-Saudi relationship in recent years have opened the door for China to exert influence in the Kingdom. After the OPEC+ meeting  in October that saw the cartel slash oil production quotas, the U.S. accused Saudi Arabia of betraying the bilateral partnership. Tensions between Riyadh and Washington have further intensified as the United States has shifted its focus to the Asia-Pacific. The disputes over hydrocarbon production and U.S. grand strategy are unlikely to subside in the future. Nor should observers expect Iran’s rivalry with Saudi Arabia to cool. For these reasons, China is likely to continue to cultivate its security relationship with Riyadh to ensure the continued flow of Saudi oil. Whether China’s regional role develops to the point that it may challenge the United States, however, remains to be seen.

The Iranian government has vowed to increase its gas output and international exports, but cannot …