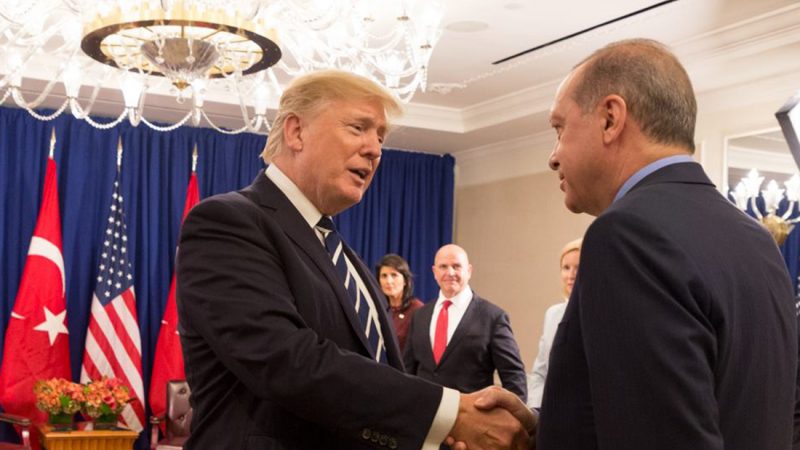 Erdogan to Visit US: Is Turkey Still a US Ally?

Turkish President Recep Tayyip Erdogan (November 13) will arrive in Washington to hold talks with US President Donald Trump. Erdogan is heading to Washington, where Turkey-US relations have been at a critical juncture in recent years, and the two NATO allies have sometimes adopted conflicting policies toward regional crises that have not pleased Ankara. Some American experts believe that the West has lost Turkey’s friendship and view US-Turkish relations from this perspective. Turkey’s relations with the United States have been visibly cold since 2003, when the Turkish parliament opposed the US military use of its territory to attack Saddam Hussein’s regime. Since then, Turkey’s foreign policy has apparently been as much westward as eastward – meaning Arab and Central Asian countries.

The great showdowns between the two member countries of NATO signal that their relations will be subject to more profound crises in the upcoming weeks.

From the American point of view, the definition of Turkey and the region; their non-cooperation signifies a change in their core policies. Otherwise, they could become a model for other countries. Turkey and the United States have undergone major changes since 2000. Today, relations between Turkey and the US are complicated and need to be redefined.

ANKARA’S REACTION TO THE U.S.A. WAS HARSH: “THEY ARE AFTER REVENGE.”

Despite recent disputes and conflicts in a telephone conversation and then at the G20 summit, Presidents of Turkey and the US have pledged to boost the two countries’ trade volume to $100 billion. The  axes of conflict between the two countries include the following: deployment of the S-400 missile system and suspension of the co-production and delivery of the F-35 aircraft to Turkey, US refusal to extradite Fetullah Gulen  and Pentagon weapons and training from the Syrian People’s Defense Units and Democratic Forces in the Eastern Euphrates. Trump also announced that Trump announced that the steel tariffs will be increased back up to 50 percent, the level prior to reduction in May and that the Ministry of Commerce would also suspend $2 billion in trade talks with Ankara.

As reported by international financial and monetary institutions, the rate of growth of the international economy is decelerating. The US trade war with China and other countries continues. The Trump administration, on the other hand, has pressed Turkey on various aspects to maintain Washington’s cooperation and influence in Turkey, exploiting its potential in the region and maintaining a $100 billion greenhouse deal with neighboring countries. Trump has forced Turkey to stop buying oil from Iran and move in line with US policies in Syria.

The volume of Turkey-US trade reached $20.73 billion in 2018. The volume of US exports to Turkey reached $12.4 billion in 2018 and the volume of Turkish exports to the US reached $3.8 billion last year. 874 US companies have invested in Turkey.  Donald Trump sent US Secretary of Commerce Wilber Ross to Turkey for five days to boost trade volume between Turkey and the United States. Turkish and US economic and trade officials have discussed ways to increase trade to $100 billion. Economic experts believe that to equalize the volume of trade between Turkey and the United States, the Turkish government must take advantage of high-tech facilities, innovation and the production of high value-added products. Otherwise, Turkey’s trade deficit with the US will increase further.

According to Turkish economic and trade experts, Turkey and the US need to step up their military and defense cooperation to reach $100 billion in trade volume with Turkey. Given the great potential for increased trade volume between the two countries, one should not expect the volume of trade to increase in the short term. US support for Kurdish armed groups that Turkey sees as a threat to its security is one of the issues that may not be resolved during Erdogan’s visit.

Relations between the United States and Turkey had cooled before the failed Turkish coup in July, but relations between the two countries became strained after the recent coup. There are problems with the strategic partnership between the US and Turkey, which has no clear strategy. The main problems between Turkey and the US stems from the lack of a clear policy on the part of Turkey.  From Turkey’s point of view the US approach to the YPG is not right. And it will be against Turkey national security in long term.

The attitude of Turkey in the United States is influenced by some foreign policy officials rather than by public opinion. Turkey’s opposition to the US also stems from its policies and actions in the region. Turkey has bought five F-35 fighter jets from the US Lockheed Martin company for about $11 billion and is part of the modernization program.

On Turkey’s southern front, what is considered a vital issue for Turkey is merely a tactical and operational issue for the United States. US political and military support for PKK terrorists has allowed the group to establish its presence. Following the Turkish military operation in northern Syria, the US negotiated with Turkey, and is currently paying attention to Turkey’s concerns in Syria.The Turkey and US agreed on 120 hours ceasefire in Northeast Syria on October 17, and following that agreement, Trump announced on Wednesday (November 7th) that the Treasury Department had ordered all sanctions against Turkey to be lifted.

Upon the question of what plans B and C were in relation to the Peace Spring Operation, Erdogan said, “We are currently implementing plan A. These rounds etc, these will continue. After these rounds, depending on all the developments in the field, what kinds of steps will be taken and where? Well, if what is expected in Manbij is not realized, we can continue with plan B or plan C.”

After the negotiations held among delegations of the two countries, President Recep Tayyip Erdogan and US Vice President Mike Pence shared with the press the 13-item “Common Declaration of Turkey and the U.S.A. in relation to Northeastern Syria”. “Turkey and the U.S.A. confirm their close relationship as two members of NATO”.

In the declaration that begins with “The U.S.A. understands Turkey’s rightful security concerns as regards Turkey’s southern border”, it was stated that developments in both countries, primarily regarding Syria’s northeast, require closer coordination for the sake of common benefits.  In the declaration, the following statement was used: “Turkey and the U.S.A. keep their commitment to protect the lands and people of NATO against all threats with the understanding of ‘We are all-for-one, and one-for-all’.”

It should be underscored that the U.S. administration showed that important names in the Congress came into play in the past to prevent genocide drafts owing to the strategic importance assigned to Turkey, but that there were changes in the attitudes of the actors taking part in the recent developments. This indicates that the strategic perception regarding Turkey is not as it was in the past in both the U.S.A. administration and the congress. These seem to prove the extent to which perceptions regarding Turkey as an ally has worsened.

The increase in trade between the two countries came as the United States announced earlier that it would sanction Turkey under the CAATSA law (Countering America’s Adversaries Through Sanctions Act) if the S-400 were deployed in Turkey. If US wants to impose sanctions against Turkey, it is expected to US-Turkey relations will face new tension and crisis.

The fact that both the decision that 1915 Armenian deportation was to be defined as a genocide was taken and the draft law proposing severe sanctions was accepted by majority vote in the U.S.A. House of Representatives on October 29th, when Turkey was celebrating its Republic Day, seems to be the most important indication of this.  It was stressed in Washington that views regarding Turkey underwent serious changes and that the decisions taken at the U.S.A. House of Representatives comprise important messages as to what can be experienced in the future.

Minister of Foreign Affairs Cavusoglu, Minister of Defense Akar and Minister of Justice Gul reacted against the drafts accepted by the US House of Representatives. Minister of Foreign Affairs Mevlut Cavusoglu, who claimed that the reason underlying the two decisions taken against Turkey was Turkey’s spoiling the game in Syria, said “A terror state was planned to be founded there. With the steps we took, with the attempts we made, we spoiled this game with the agreements we made with both the U.S.A. and Russia first in the field and then on paper. They are trying to take the revenge of this. There is no other explanation.”

Adoption of the Armenian Genocide in the US House of Representatives ahead of Erdogan’s trip to the United States is one of the things that could cause a serious crisis in the relations between the two countries. Trump, however, can veto the ban. But the passage of such resolutions and the threat from US officials to impose sanctions on Turkey under certain circumstances could have a negative impact on the two countries’ relations.