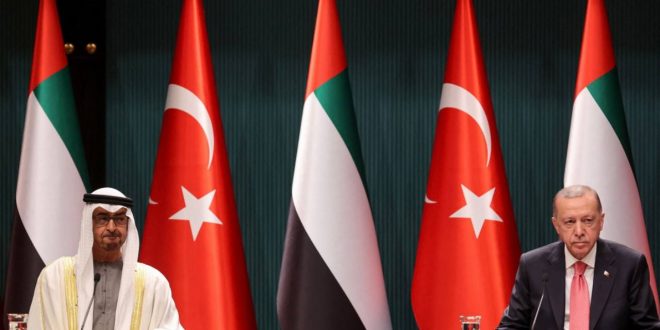 Analysis: Amid a trend of de-escalation, Turkey and the UAE are repairing broken ties. But while economic relations are driving the rapprochement, political differences remain.

Turkey’s relations with Arab countries have been strained in recent years, but the US withdrawal from Afghanistan has created a new balance of power in the region.

Over the past decade, relations between Turkey and the UAE have been particularly tense, with both countries finding themselves on opposite sides of regional conflicts in Syria, Libya, Egypt, the energy struggle in the Mediterranean, and support for the Muslim Brotherhood.

However, a driving factor for the UAE, which wants to establish economic and diplomatic channels both in the region and internationally, is stability.

The Arab Spring, which started in 2011, triggered new confrontations within and between the countries of the region, with the UAE directly participating in unfolding events.

However, some view the signing of the Abraham Accords and the subsequent normalisation process between the UAE and Israel as a concrete sign of the end of the Arab Spring, and the rise of a new form of regional politics.

“Over the past decade, relations between Turkey and the UAE have been particularly tense, with both countries finding themselves on opposite sides of regional conflicts”

The thawing of Turkey’s relations with the UAE began earlier this year but was punctuated by the visit of Mohammed bin Zayed Al Nahyan (MBZ) to Turkey in late November, the first in nine years.

While political differences between the two countries are not expected to be resolved in the short term, the increasing level of economic cooperation emerging from the visit could prevent escalating tensions in the future if it leads to interdependence.

With a population approaching 10 million, and consisting mainly of foreigners, the UAE has received the moniker of “Little Sparta” owing to its aggressive foreign policy. Abu Dhabi has participated in several regional conflicts over the years, such as Yemen, Libya, and Syria, but is currently seeking to push the image of regional ‘peacemaker’.

The UAE’s attempt to isolate Qatar in 2017 failed, owing to the support provided to Doha by Turkey. In that sense, MBZ’s visit to Turkey can be viewed as part of a broader effort by Abu Dhabi to reshape its foreign policy.RELATED

As an ally of Qatar, Turkey stood by Doha when the UAE, Saudi Arabia, Egypt, and Bahrain imposed an embargo on Qatar. Since then, military ties between Turkey and Qatar have been reinforced.

The blockading states had at the time issued a series of demands to Qatar, one of which was the withdrawal of Turkish troops. However, Qatar did not accept their demands, regarding them as a violation of the country’s sovereignty.

At the beginning of this year, however, GCC countries and Egypt signed the ‘Al-Ula declaration’, which brought the blockade of Qatar to a formal end and eased tensions.

Economic ties as a backbone

Abu Dhabi Development Holding (ADQ) Board of Directors President Mohamed Hasan Al Suwaidi announced that a fund of $10 billion had also been allocated within the scope of the agreements. Furthermore, a memorandum of understanding for cooperation was signed between the Central Bank of the Republic of Turkey (CBRT) and the Central Bank of the UAE.

Prior to MBZ’s visit, the Turkey-UAE Joint Economic Commission, held in Dubai and attended by the UAE’s Minister of State for Foreign Trade Sani ez-Zuyudi and Turkish Minister of Commerce Mehmet Muş, saw an agreement reached on a plan aimed at diversifying non-oil commerce and increasing the trade volume between both countries.

Drawing attention to the strategic location of the two countries, Zuyudi pointed out that Turkey is an important market for Emirati products to reach Europe and Asian countries.

Moreover, the UAE can act as a bridge for Turkish products to reach the Middle East and Asian and African countries. He drew attention to economic developments and projects, calling on Turkish companies to take advantage of these developments.

Energy could also form a backbone of economic relations. In September, a Turkish official welcomed Ankara-Abu Dhabi talks on UAE investment in Turkey’s energy sector. “The Emirati people have already shown interest in generating electricity and more talks are expected with the UAE Minister of Energy, Soheil Al-Mazrouei,” Turkish deputy energy minister Alparslan Bayraktar said. “There are different areas in which we can work together.”

While both countries are in an unfavourable position in terms of carbon dioxide emissions, the UAE has made good progress in the field of renewable energy in recent years.

Turkey has potential in wind and solar energy, and Emirati companies could invest in Turkey’s renewable energy sector. Indeed, there could be further cooperation by both countries in this energy transition process.

“It would be difficult to imagine the ideological tensions between Turkey and the UAE going away. Ankara and Abu Dhabi have fundamentally different stances on a host of regional files and their competition for influence will likely remain a geopolitical reality”

Despite the gradual normalisation of economic ties, question marks remain over the long-term future of the rapprochement and its impact on wider regional relations.

“We are currently experiencing a de-escalation moment in the region. Countries are reaching out to each other, hence no one party would want tense relations to prevail,” Dr Ali Bakir, a Research Assistant Professor at the Ibn Khaldon Center for Humanities and Social Sciences at Qatar University, told The New Arab.

“When it comes to Turkey and the UAE, I think that the current economic outreach would be a good case to test whether they can manage to reset their relations and start a new page or if their differences will ultimately prevail once international and regional settings change.”

Given the new balance of power in the region, there are also questions regarding the future of Turkey-Qatar relations after Ankara and Abu Dhabi’s gradual rapprochement. But Dr Ali Bakir believes that this alliance will endure.

“As for Qatar, I believe the Turkey- Qatar alliance is the second most enduring alliance in the region after the Iranian-Syrian alliance. It reached a point of maturity and was put under several tests only to re-emerge stronger,” he says.

“The current regional settings are quite suitable for the Qataris. I don’t think that better Turkish- Emirati relations will leave negative implications at the current moment on Doha or Doha-Ankara relations.”

Giorgio Cafiero, CEO of Gulf State Analytics, agrees. “The UAE is not set to replace Qatar as Ankara’s most important partner in the Gulf Cooperation Council. There are synergies between Ankara and Doha when it comes to many foreign and security policies which are very unlikely to be established between Erdogan’s Turkey and the UAE,” he told The New Arab.

“The 2017-2021 Gulf crisis pushed Ankara and Doha closer together in ways that are unlikely to be undone by any rapprochement between Turkey and the UAE. That being said, if ties between Ankara and Abu Dhabi can significantly improve, Turkey might have a more balanced position in the Arabian Peninsula compared to a year ago when there was hostility between Turkey and the UAE.”

However, given the foreign policy differences between Turkey and the UAE, and clashing ideological positions on regional and international issues, it is unlikely that such tensions will be resolved in the short term.

“It would be difficult to imagine the ideological tensions between Turkey and the UAE going away. Ankara and Abu Dhabi have fundamentally different stances on a host of regional files and their competition for influence will likely remain a geopolitical reality in the Middle East and other regions too,” Giorgio Cafiero told The New Arab.

“The odds are good that the conflicts in Syria and Libya will remain sensitive issues in which the Turks and Emiratis are positioned as opposing stakeholders. That said, there is clearly a determination on the part of both states to warm relations and enter a new chapter, highlighted by Crown Prince Mohammed bin Zayed’s historic trip to Turkey in November 2021.”

For now, cooperation is mostly taking place through economic ties, trade, and energy. Whether such bilateral cooperation can be built on in the future and expanded into other areas remains to be seen.